There’s busy, and then there’s Nick Wilkerson’s brand of busy.

Wilkerson, a Van native and sophomore music education major at Tyler Junior College, is spending most of his waking hours performing in, rehearsing for, or helping to organize one of the myriad music events held this week on the TJC campus.

It’s been “one of those weeks” for the TJC band program, with a jam-packed schedule including wind ensemble and TJC Jazz Festival performances, a Winter Guard International indoor drumline competition in the Metroplex, and an upcoming Caribbean cruise and shipboard performance with the Apache Belles.

“Nick is involved in literally every event and ensemble that is performing and traveling over the next 10 days,” TJC Director of Bands Jeremy Strickland said.

With that, Strickland produced a detailed list outlining Wilkerson’s schedule for the week, including private lessons (he plays trombone, euphonium and keyboard), rehearsals and performances (he’s in the wind ensemble, indoor drumline, jazz ensemble, and trombone and tuba/euphonium groups) to his algebra and history homework and makeup tests in advance of the trip – plus his two part-time jobs.

Wilkerson said, “It’s pretty out of the ordinary and tiring to have this much going on, but it’s also a lot of fun.” 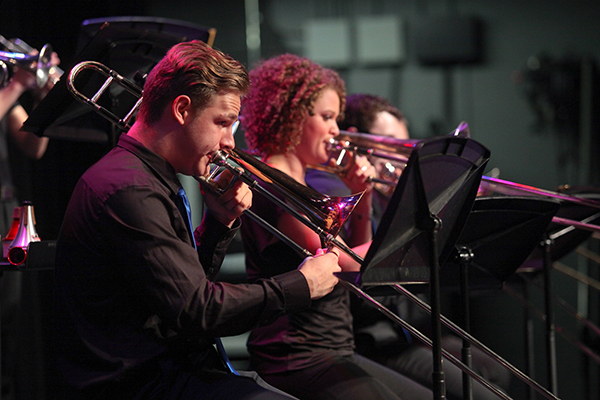 In addition to TJC Wind Ensemble and indoor drumline, Wilkerson is also a member of TJC Jazz Ensemble 1.

Culminating the gauntlet of rehearsals, performances and homework is a weeklong, spring break cruise aboard the Carnival Breeze, where members of the TJC Apache Band and Apache Belles will serve as shipboard entertainment.

“The light at the end of the tunnel is the cruise,” he said. “If I can make it to Sunday when we board the ship, I’ll be OK.”

He’s also planning to carve out some practice time on the ship, since he has scholarship auditions at Stephen F. Austin State University and Texas A&M-Commerce the week after he returns.

Band director in training
Asked about his work ethic, Wilkerson shrugged, “When I was in high school, I did well and made good grades; but I never had to manage my time or really study. If I wanted to go and do something, I just did it.”

But with coming to TJC and figuring out he wanted to pursue a career as a band director, Wilkerson clamped down and found his focus.

He admits it’s a bit extreme; but he said college gave him a whole new perspective on structure, responsibility and goal setting.

“Nick wants to be a good band director, and I believe that’s exactly what he’ll do,” TJC Assistant Director of Bands Heather Mensch, who directs TJC’s low brass and jazz programs.

“The fact that he balances the schedule he balances – and still manages to stay sane and keep his great personality – is what is going to make him a fantastic band director, because kids are drawn to that kind of personality. He’s got the drive to keep the crazy-busy life of a band director.”

Mensch said he’s also forward thinking about what he needs to do now to be good at his job later.

“Nick didn’t have to be on the indoor drumline, but he joined because he wanted to learn more about percussion so he’d be a better band director,” she said.

“His primary instrument is trombone; but he’s also picked up the euphonium because he knows that to be a good band director, it helps to have some euphonium skills.”

“Eventually, I hope to be at a college and teach band and low brass like Mrs. Mensch does. I certainly feel TJC has more than prepared me for what comes next.” - Nick Wilkerson

‘The TJC stamp’
She said Wilkerson also keeps in touch with his Van High School director and TJC band alumnus Ryan McInturff; and he’s returned to his hometown on occasion, to help out with the Mighty Vandal Band program.

“Nick has been nurtured along the way by Mr. McInturff, who was also a standout TJC band student,” Mensch said. “Ryan was a lot like Nick when he was at TJC, in that he had the same great attitude and work ethic.

“That’s what you hope for when you teach students who go off and become good teachers. You hope they’ll send you ‘new, little McInturffs,’ which is what we’re seeing now by getting students like Nick. It’s great to see the lessons come full circle.”

Of his ultimate career goals after college, Wilkerson said, “Eventually, I hope to be at a college and teach band and low brass like Mrs. Mensch does. I certainly feel TJC has more than prepared me for what comes next.”

Mensch said, “Nick is going to be a fantastic teacher wherever he lands, and he would certainly be college-teaching material.

“He’s very well grounded, and he represents every good thing about our program. We’re excited for him to be out in the world with our TJC stamp on him.”

For more on the TJC band program, go to www.tjc.edu/band.