In the days leading up to Tyler Junior College’s Homecoming Week, a mystery has been unfolding: “Who’s Harry?”

Hints have appeared on TJC social media:
• His name is Harry and he’s flying in for homecoming.
• He has a reputation for being strong and powerful.
• He’s very social and all about teamwork.
• He’s very strategic and always has his friends’ backs.

Harry’s identity has been met with much speculation from TJC students, employees and the community at large: Harry Styles? Prince Harry? Harry Potter? 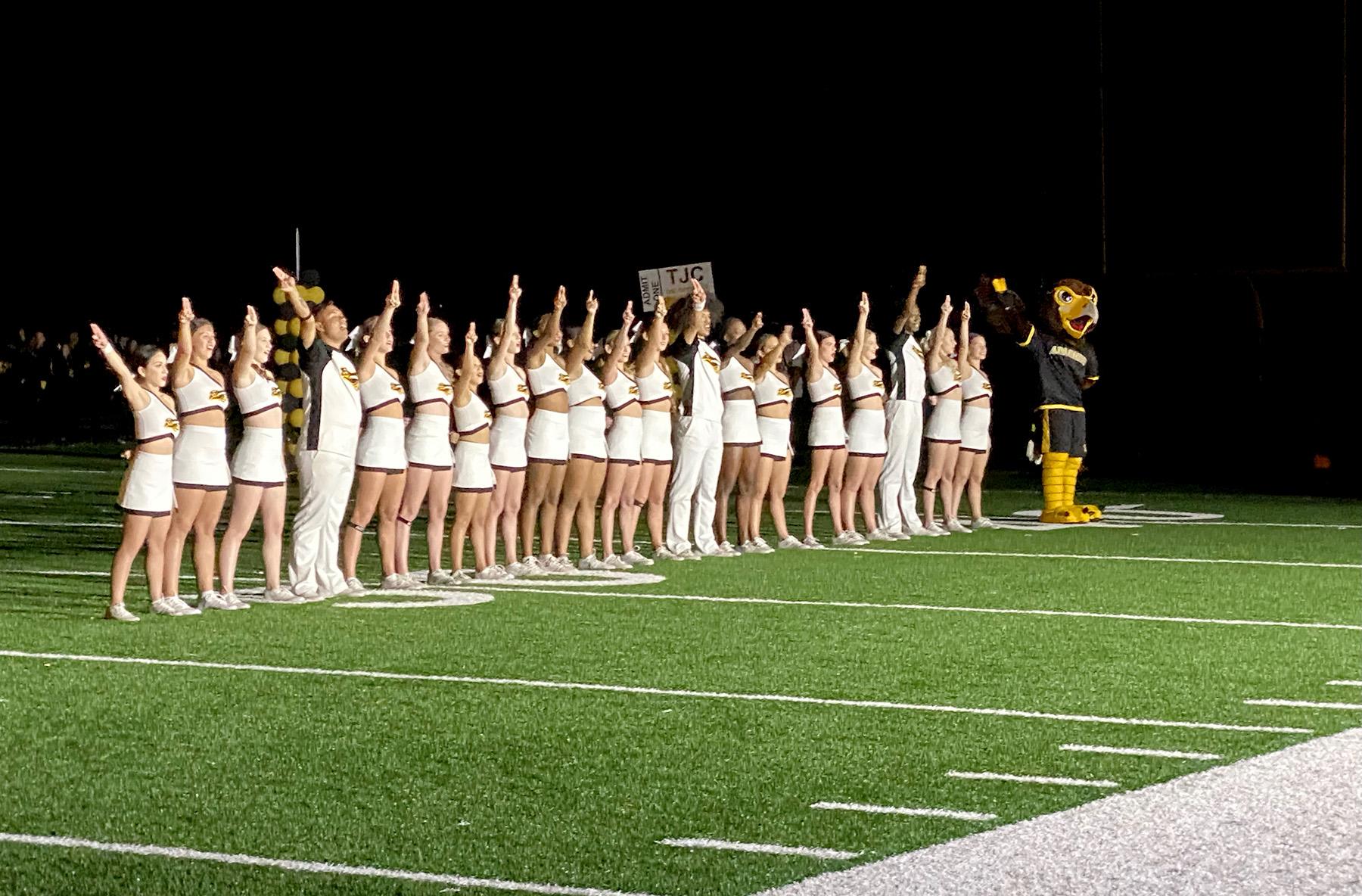 Harry the Hawk takes his place alongside the TJC cheerleaders for his first TJC Alma Mater during Thursday night’s homecoming pep rally.

TJC will continue to honor and be known as the Apaches, while Harry the Hawk will be the newly adopted mascot. In the same way that the University of Alabama’s nickname is the Crimson Tide, their mascot is Big Al the elephant.

TJC officials carefully chose the Harris’s Hawk as a complement to the Apache, since the hawk has long been a part of Native American lore and represents strength, survival and the passing of knowledge from parent to offspring.

Since the creation of TJC in 1926, East Texans and students from throughout the state and country have had access to a high-quality education.

TJC has long been known for an unparalleled spirit and pride — founded in world-class academic programs, a very active student life, and student organizations that, in addition to providing student engagement, reach out to serve our beautiful communities. With our beloved institution approaching its 100-year anniversary, there are traditions that are rich and powerful, and that have withstood the test of time.

Activities and groups that define the College today took shape as early as 1946 when the TJC choir was formed. Soon after, in 1947, the mighty Apache Band and the Internationally Famous Apache Belles came to fruition.

The drum beat during Homecoming week and the traditional Rim Walk by the Apache Band and Apache Belles at home football games in Rose Stadium have been revered traditions since the late 1940s.

Through its 96 years of history, TJC has proudly celebrated the Apache Spirit — Apaches, synonymous with “fierce warrior.”

Over time, our students, faculty, staff and community have been fierce in their pursuit of leadership and service to everyone.

For centuries, the Apache people — proud hunters, warriors and artisans — passed their history, teachings and traditions from generation to generation. So important was the education of the Apache young in the ways of their people that the very survival of their nation depended on it.

Respected by Native Americans for its power, intuition, victory, healing, nobility, recollection, cleansing, visionary power and guardianship qualities, the hawk was often a spirit guide to the Apache tribe.

In the spirit of teaching and guiding our students into their own future, and while fostering principles of truth, honor and integrity, the hawk — specifically the Harris’s Hawk — has now been chosen by Apache Nation to be our spirit guide.

For it is in that spirit that we teach, learn and grow in wisdom and in knowledge. 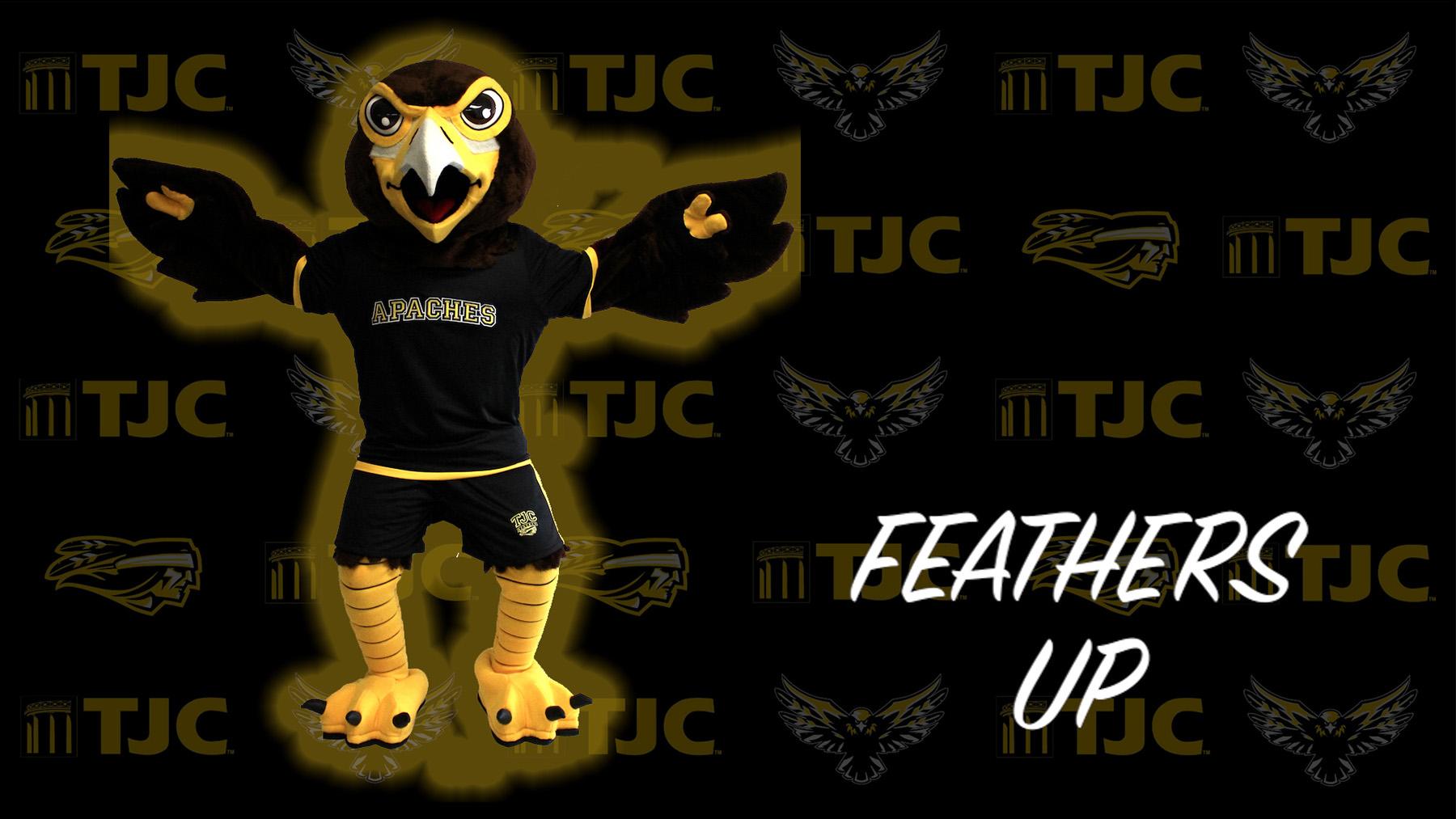 Harry the Hawk is the newly adopted TJC mascot.

The Apache and the Harris’s Hawk — one of man and the other of nature — are now synonymous symbols to represent the spirit and pride that lives in each one of us.

We are proud to be TJC. We’re proud to be Apaches. And today we welcome the hawk as a guide to the Apache Nation to share in TJC’s history and vision.

Every year we provide more than 12,000 students the chance to obtain a higher education, but also the chance to be a part of a family of likeminded leaders.

Today as Apaches, we are adding to the TJC Family and Legacy as we introduce TJC’s mascot.

Feathers Up, as it is a great day to be an Apache!

For more information on Harry the Hawk, or to request an appearance, go to TJC.edu/Harry.