Solomon and Stanger are both graduates of the TJC Surveying and Geomatics program, and the April 23 awards banquet was attended by nearly 150 members of the TJC surveying community, including alumni, friends, industry partners and members of their professional society, the Texas Society of Professional Surveyors (TSPS), and their foundation, Surveying Education Foundation of Texas (SEFT).

Master of ceremonies Shane Neally, a 1992 TJC surveying graduate and Registered Professional Land Surveyor, set the tone for the evening by saying, “We don’t often get together to celebrate ourselves, but that is exactly what we’re going to do tonight.”

The Distinguished Alumnus Awards were presented by Mebane and Farrington.

A native of Van, Joey Stanger attended TJC from 1972 to ’74 and obtained a certificate of proficiency in land surveying. He began his surveying career in the spring of 1973 with a local surveying and civil engineering firm in Tyler and became a registered surveyor in 1979, at the age of 25.

In 1987, he founded Stanger Surveying, which currently maintains a home office in Tyler and a branch office in Ben Wheeler, with approximately 50 employees. In addition to Stanger, six of the professional staff and eight surveying technicians are graduates of the TJC Surveying and Geomatics program. The company specializes in surveying services to the energy sector but also serves a wide range of commercial and private sector clientele.

In 2008, he was named Texas Surveyor of the Year by the Texas Society of Professional Surveyors.

He has been a member of the TJC Alumni Association board and was the 2013 recipient of the TJC Apache Sprit Award. He is a loyal donor to TJC Foundation scholarships and to the TJC Promise scholarship fund.

Stanger was a founding board member of the Surveying Education Foundation of Texas Inc. (SEFT), a non-profit foundation created in 1999, to provide financial support for surveying and mapping students of the Tyler area. He served as SEFT board chairman from its inception until 2019 and continues to serve as vice chairman. The organization has provided over $350,000 in financial support to the surveying and mapping programs for student scholarships, field trips to the General Land Office in Austin and to TSPS state conventions.

“It’s great to come out and support this program, which has been a big part of my life,” Stanger said. “I think most people will agree that successful individuals have had a lot of help along the way, and I certainly have.”

In addition to thanking his parents, Stanger mentioned Prof. E.E. Hendrix, his first surveying professor during his freshman year at TJC.

“He was quite a character and had served under General Patton in World War II in North Africa as an artillery officer,” he said. “I’d like to thank him for his dedication to the surveying profession and for his influence on my early surveying education.”

Stanger continued, “I also want to thank (TJC Surveying and Geomatics professors) Patti Williams and Willace Johnson. I don’t know two other individuals who are more enthusiastic about their jobs than these two. They’ve recruited students and gotten them ready for the surveying profession, and they’ve been a tremendous asset for my company and my business.”

In her introduction of Solomon, Farrington said, “A little less than two decades after Mr. Stanger graduated from the TJC surveying program, Chris Solomon found his way to Pirtle Hall and began the journey that led him to where he is today.”

Farrington continued, “Mr. Solomon is the president and CEO of SAM Companies, headquartered in Austin, Texas, but with offices all over the United States. He has a company of thousands of employees, and that company has managed to win one of the Austin Business Community’s most coveted awards for 10 years in a row – the Best Place to Work Award. That tells you a lot about Mr. Solomon as a leader and as a person.”

Solomon was born in Wentzville, Missouri, but moved to Houston with his mother when he was young and grew up with a keen interest in the outdoors. His father suggested pursuing land surveying because it aligned with his interests, so he enrolled at TJC to study surveying and mapping technology.

He credits his education at TJC for providing direction and a solid foundation for his successful career, as well as his parents for being outstanding role models who instilled in him a strong work ethic and the drive to succeed.

Guided by mentors such as Williams, Solomon earned an Associate of Applied Science in Land Surveying. While attending TJC, he also worked at Stanger Surveying, gaining early practical experience. After graduation, he accepted an opportunity to work with Survey Resources Inc. (SRI) in Austin and continued his professional development there.

In 1994, SRI President Samir G. Hanna, founded his own company, Surveying And Mapping, Inc. (SAM), and Solomon joined the firm from its inception. This began a long career with SAM Companies that has spanned more than 26 years. Mentored by Hanna over that time, Solomon advanced through every level, including leading the company’s successful expansion into the oil and gas market.

Today, Solomon serves as president and CEO, and SAM Companies is the largest combined geospatial and construction services firm in the U.S., with a record of success and growth that is unparalleled for companies of its type. SAM has over a thousand employees located in more than 30 offices nationwide and has grown to over $180 million in annual revenue.

Throughout his personal and professional successes, Solomon has never forgotten, and greatly appreciates, the strong foundation upon which TJC helped him build his future.

“I think back to when I started working at Joey’s company very early on when he was building his company,” Solomon said. “I think there were maybe one or two crews, and it grew to 30 crews. Joey, thank you for giving me that opportunity 32 years ago.”

Solomon continued, “Joey has been a pioneer in this industry for a long time, and I’m proud to say that I got to work with one of the pioneers in this industry. Thank you for leading all the initiatives to support this program and our profession. Thank you to all the SEFT members for investing in the program and the students that Willace and Patti lead on an annual basis.”
TJC President and CEO Dr. Juan E. Mejia then came forward to present Stanger and Solomon with Presidential Honoree medallions.

“The signature of authenticity for our institution is our alumni,” Mejia said. “So, tonight, we are going to award very special medallions to these honorees. TJC has been around for almost 100 years, and there are less than 10 medallions that have been given to anyone, and tonight, we’re giving two. We offer sincere congratulations to the Solomon and Stanger families.”

Awards of Recognition
Neally, Johnson and Williams then presented representatives of SEFT, TSPS East Texas Chapter 4 and industry partners G4 Geomatic Resources and AllTerra with plaques of appreciation for their dedication and support shown to the TJC Surveying and Geomatics program. 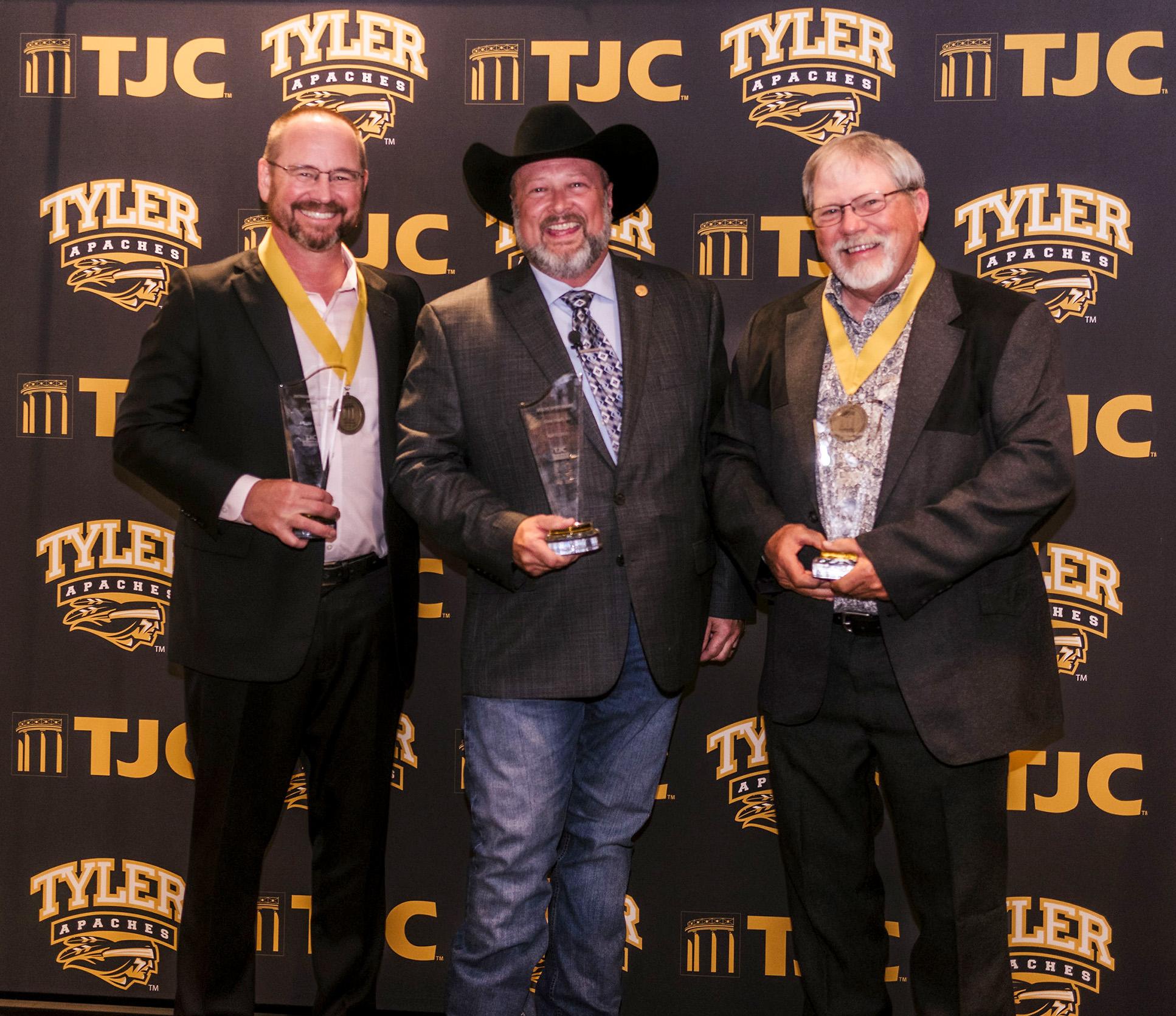 Toward the end of the evening, Neally was surprised with the TJC Alumni Association’s Apache Spirit Award.

This award recognizes a person or group who has shown spirit and motivation through the contribution of time and energy to a program or activity, which has measurably benefited the College.

At that moment, the many life connections between these members of the TJC surveying alumni community came full circle: Solomon and Neally graduated from the TJC Surveying program one year apart — and were even roommates for a short time.

Neally said, “Being surprised with the TJC Apache Spirit Award was just that — surprising! Not knowing I was receiving the award, I didn’t have prepared remarks and was really speechless.”

The awards banquet was preceded by the inaugural TJC Surveying Golf Tournament at Oak Hurst Golf Course in Bullard. The event was organized by Chris Cox, a 2004 graduate of the TJC surveying program and the men’s golf team. Cox is now a Registered Professional Land Surveyor and vice president and operations manager at SAM Companies.

“We have benefitted tremendously from the involvement of outstanding local surveying companies like Stanger, and companies like SAM help us give the students a vision for the future,” Johnson said. “We’re proud of our alumni and appreciate all that they do.”