The TJC Alumni Association honored its 2021 class of award recipients in a glittering event held Saturday, Oct. 2, in the new Rogers Palmer Performing Arts Center on the TJC main campus.

“It’s exciting to host the TJC Alumni Awards at this location for the first time,” said Susan Farrington, TJC director of alumni relations. “We now have the ability to showcase student, alumni and faculty talent while honoring the best among us.”

Mitch Andrews, TJC vice president for institutional advancement and the evening’s master of ceremonies, explained the focus of this year’s awards on two areas of significance to the College and to the future of the East Texas region.

“These awards represent the promise of a college education for our youth in return for their achievements in high school, including good grades, good behavior and community service,” Andrews said. “The TJC Promise was developed in 2016, through a partnership with six East Texas communities and exists in large part because of the leadership of the ISD superintendents that we will honor here this evening.”

Andrews continued, “The awards also represent a legacy and a vision for the arts of TJC, and we celebrate the extraordinary community support that made the Rogers Palmer Performing Arts Center not just a possibility but a reality. We honor Amy Faulconer, a very generous individual who significantly invested in this resource for TJC and the community. And finally, the new Rogers Palmer Performing Arts Center helps us to showcase the disciplined mastery and extraordinary talent of the College’s faculty and students. It also allows us to put a well-deserved spotlight on our legacy faculty and the many years of teaching excellence that they represent. Tonight, we honor the 50-year tenure of TJC professor of music, Frank Kimlicko.” 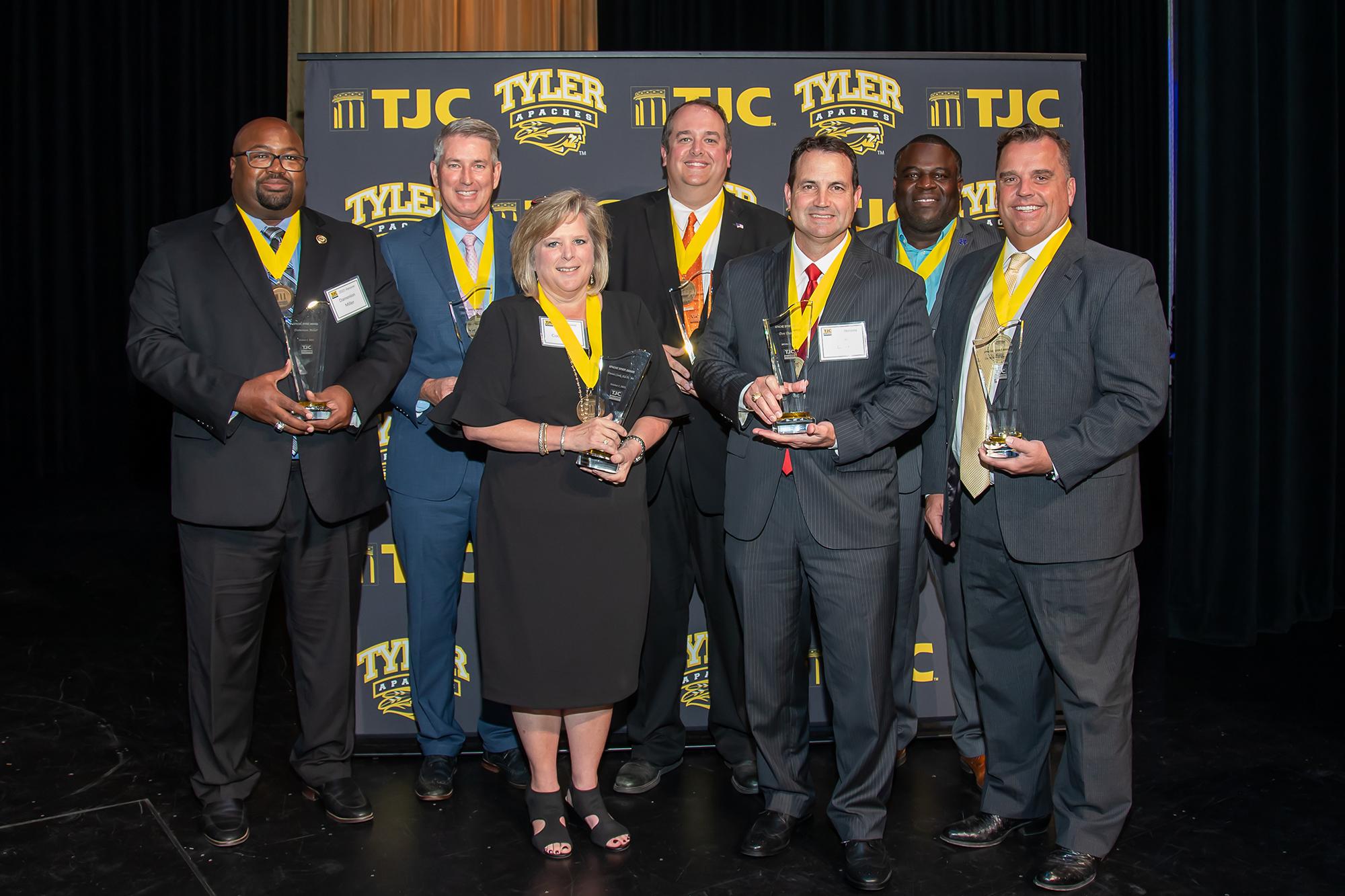 Apache Spirit Award
The Apache Spirit Award recognizes a person or group who has shown spirit and motivation through the contribution of time and energy to a program or activity, which measurably benefited the College.

This year’s Apache Spirit Award was presented to eight current and former area school superintendents — six of whom are TJC alumni — for their leadership in helping to create the TJC Promise program, which provides every eligible high school freshman with the opportunity to earn up to two years of a college education at TJC.

Black and Gold Award
The Black and Gold Award recognizes outstanding devotion to TJC by an individual who is not a former student but who has volunteered time, effort and resources to promote the mission and goals of the College. 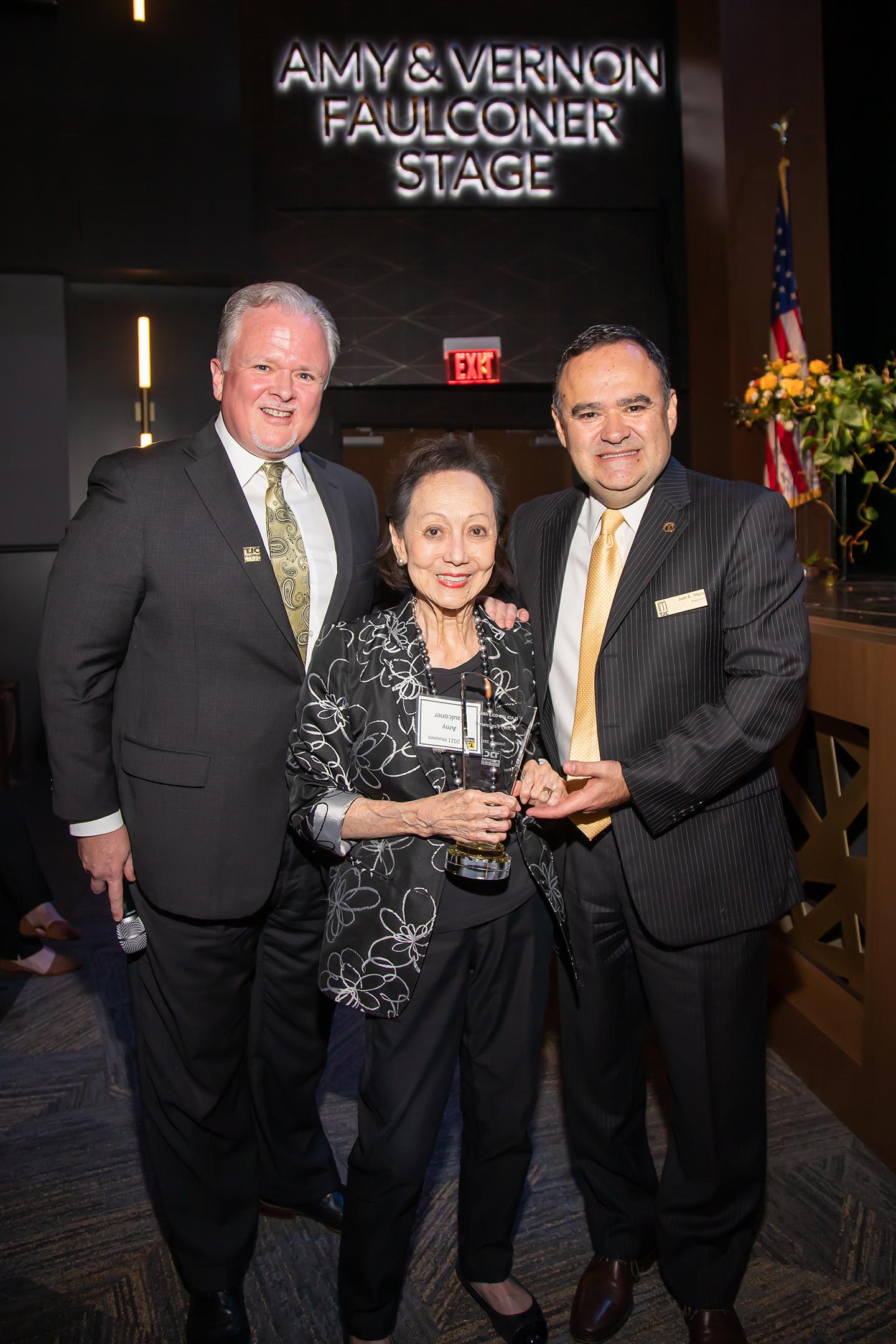 Amy Faulconer, originally from Hawaii, is a resident of Tyler, and she believes in the importance of supporting the communities in which we live.

As a young Amy Hamamoto, she pursued her higher education at Grinnell College in Iowa, where she achieved a Bachelor of Arts degree and met the love of her life, Vernon Faulconer. Vernon’s career in the oil and gas industry took the Faulconer family to Kansas and eventually to Tyler in 1970. His passion for collecting art encouraged the couple to become involved in the rich arts culture of Dallas. Amy has previously served on the board for the Dallas Opera and currently serves on the board of the Dallas Museum of Art.

Over the last several years, Amy’s involvement in local causes and organizations in Tyler has become a priority. She is currently a board member for the TJC Foundation and the Tyler Museum of Art.

She also served on the community steering committee of the Campaign for the Performing Arts for the TJC Foundation, which has successfully supported the development and funding of the new Rogers Palmer Performing Arts Center. In addition to her Black and Gold Award, her generosity has been honored in the new facility with the Amy & Vernon Faulconer Stage and the Amy & Vernon Faulconer Presidential Suite. 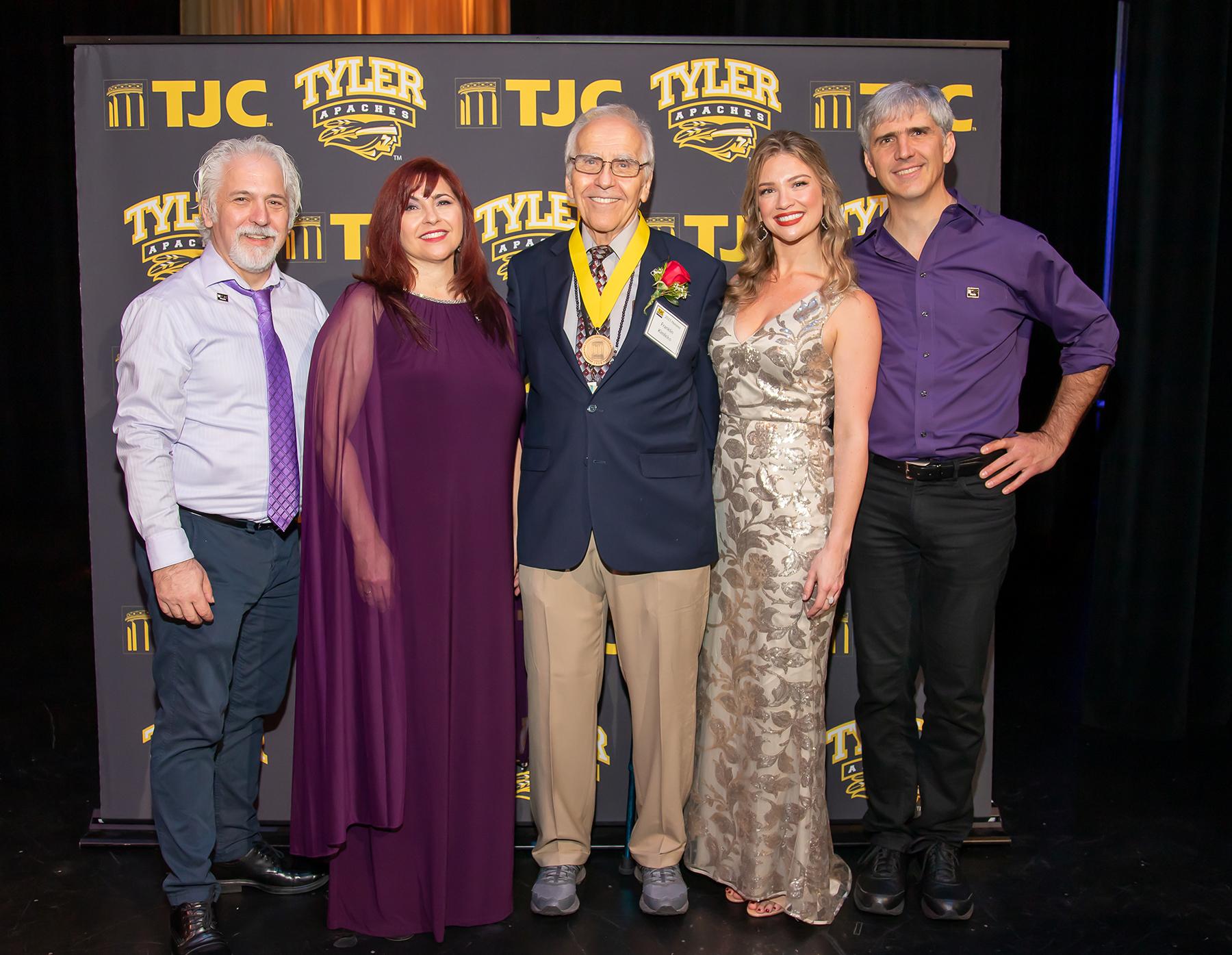 Now in his 50th year as a guitar and music theory professor at TJC, Kimlicko has imparted that knowledge to thousands of students who started out just as he did — as a kid with raw talent and a desire for success, but very little clue as to how to achieve it.

Students from all walks of life have come through Kimlicko’s guitar studio and music classes since he joined the TJC faculty in 1972, but they all have one thing in common:

“Everyone has the capacity to learn,” he said. “I feel like we’re partners in their education. It’s both of us together, helping them to excel. I help them, but they have to help themselves as well. If they do their part and I’m pushing with my part, we have great results.”

He takes a holistic approach to teaching, with students exposed not only to the mechanics of playing an instrument and reading notes on a page but also in the interpretive aspect of conveying a range of emotions.

A full range of emotions were very much on display during Saturday’s musical tribute to Kimlicko, which included a surprise performance by his four children (all of whom attended TJC), Jon Kimlicko, Catherine Holmes, Michael Kimlicko and Christa Kimlicko Jones, who performed “You’re the Compass,” an original song they wrote especially for him for this night. Jon, Catherine and Michael performed on the Wise Auditorium stage, with Christa joining her siblings virtually from New York City, where she is a theater instructor.

Operatic soprano Julianne Casey, a 2016 TJC alumna, flew in from New York City, where she is a second-year graduate student at the Mannes School of Music at The New School. Kimlicko conducted Casey and the guitar ensemble through a challenging program of operatic pieces by Giacomo Puccini, René Rabey, Fernando Obradors and Giuseppi Verdi.

TJC President Dr. Juan E. Mejia said, “Tonight, we recognize our amazing honorees, and we honor them for being bold, courageous leaders when it wasn’t as clear what the TJC Promise would be like, for the vision that was had by Amy Faulconer for a beautiful place such as this, and for the legacy of Professor Frank Kimlicko. This is a special day and a special moment. We are indebted to them as champions of TJC.”