She’s a Navy veteran, a mother, a foster parent, a ballet dancer, a former nurse at East Texas Medical Center, and a professor at TJC for the past 13 years.

Christiansen left home to join the Navy at a time when few women were allowed on non-combat ships. Women served in the navy for nearly a century, but only on hospital ships.

“I wanted to leave the house but I wasn’t ready for college,” Christiansen said. So for 13 years she served alongside 60 women and 1,300 men aboard Navy ships, including a submarine tender – a type of ship that resupplies and supports the Navy’s subs.

After being honorably discharged from the Navy in 1992, Christiansen began looking for jobs in East Texas.

“I looked in the newspaper and saw that most of the jobs were in nursing,” she said. So she went to nursing school on the GI Bill, starting at TJC and finishing with her bachelor’s at UT Tyler. “During school they called me ‘The Admiral.’”

“I selected nursing because of job security, but I didn’t realize how much I’d love it.” 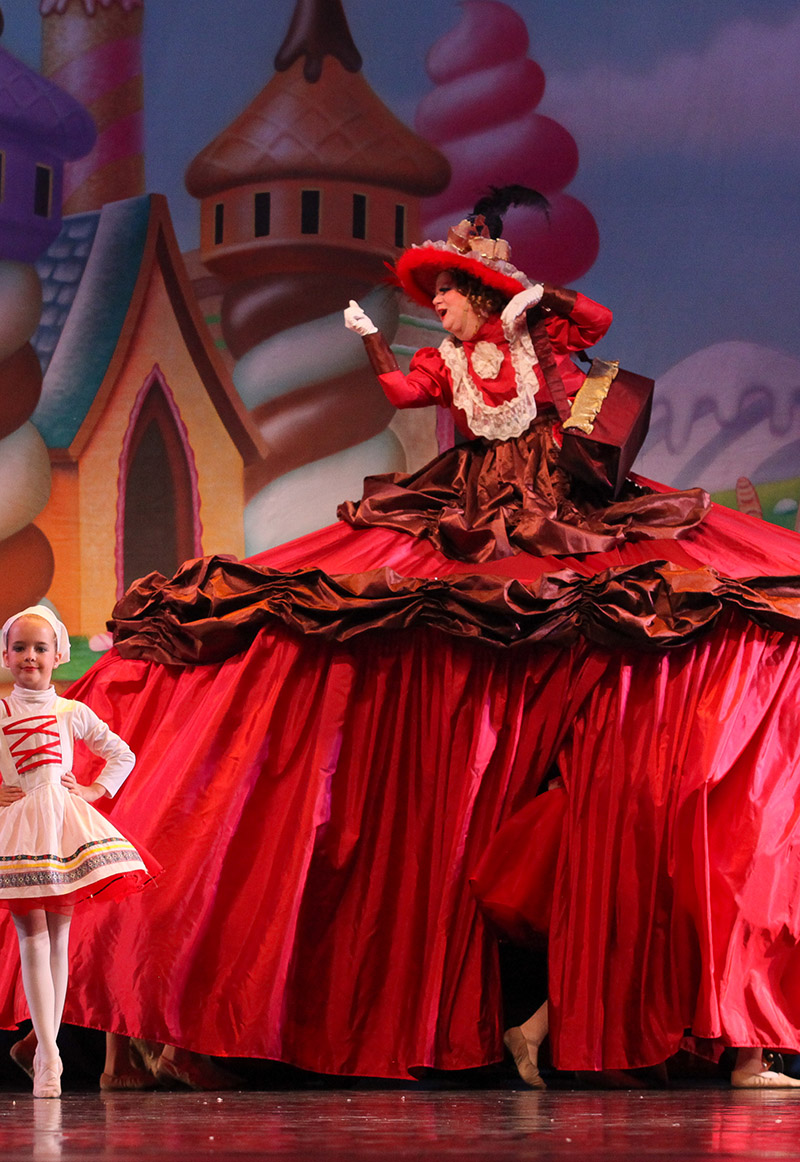 Ginger Christiansen as Mother Ginger in TJC's production of "The Nutcracker."

From there she spent nine years at ETMC as a float nurse and pediatric nurse. Float nurses can work on any floor in the hospital, which she saw as an exciting opportunity.

“You get to do a little bit of everything,” she said, which transferred to her current role as a professor of nursing in the ADN program at TJC. “What I found was that it gave me a well-rounded background in all of the specialty areas.”

As a professor, Christiansen utilizes concept-based learning, teaching the big picture, rather than subject-specific content. Nursing is a difficult major, and trying to teach every single ailment and scenario is nearly impossible, she says.

Instead, the nursing program teaches higher-level concepts that students can incorporate with their clinical experience to provide the best care for their patients. And it’s been very effective, bringing the overall pass rate to 100 percent.

She also implemented a flipped-classroom model, a relatively new and increasingly popular education model, where students listen to the lecture as their homework and do activities and problem-solving in the classroom.

“Our nursing students learn very differently than they did 13 years ago when I started,” she said. “They learn by doing, not by sitting in a classroom listening to a lecture.”

She balances a rigorous teaching schedule with an even more busy family and personal life. Together, she and her husband of 31 years have two biological children and three foster children with special needs.

In her spare time this winter, she’s rehearsing for two roles in TJC’s production of “The Nutcracker,” playing the grandfather and mother Ginger, roles she’s played for the past nine years.

“What’s most important is our special someone who walks across that stage at the end of every semester.”

She takes her youngest foster child to practice with her when she can.

“He loves the music,” she said.

And she sees TJC’s mission of making a difference.

“We take someone and see their potential and grow them into someone who’s a very productive member of society. It’s an affordable education, and it’s a good education. It allows people to go out and make their own difference in the world.”

“What’s most important is our special someone who walks across that stage at the end of every semester.”