Suddenlink Communications will be performing systems maintenance on our campus internet from midnight tonight to 6:00 a.m. tomorrow morning. During this time on-campus internet will be unavailable.

TJC has recognized 689 graduates for the Fall 2020 semester.

The graduates were celebrated during a three-day series of personal, “VIP-graduation-style” ceremonies created to allow the students to celebrate their achievement and walk the stage while still maintaining health and safety guidelines.

TJC held 21 micro ceremonies Monday-Wednesday in Wagstaff Gymnasium, with attendance limited to 20 graduates per session. Each graduate was allowed to bring two guests. Physical distancing and face coverings were required, and faculty and staff were represented by cabinet members of the TJC Faculty Senate. 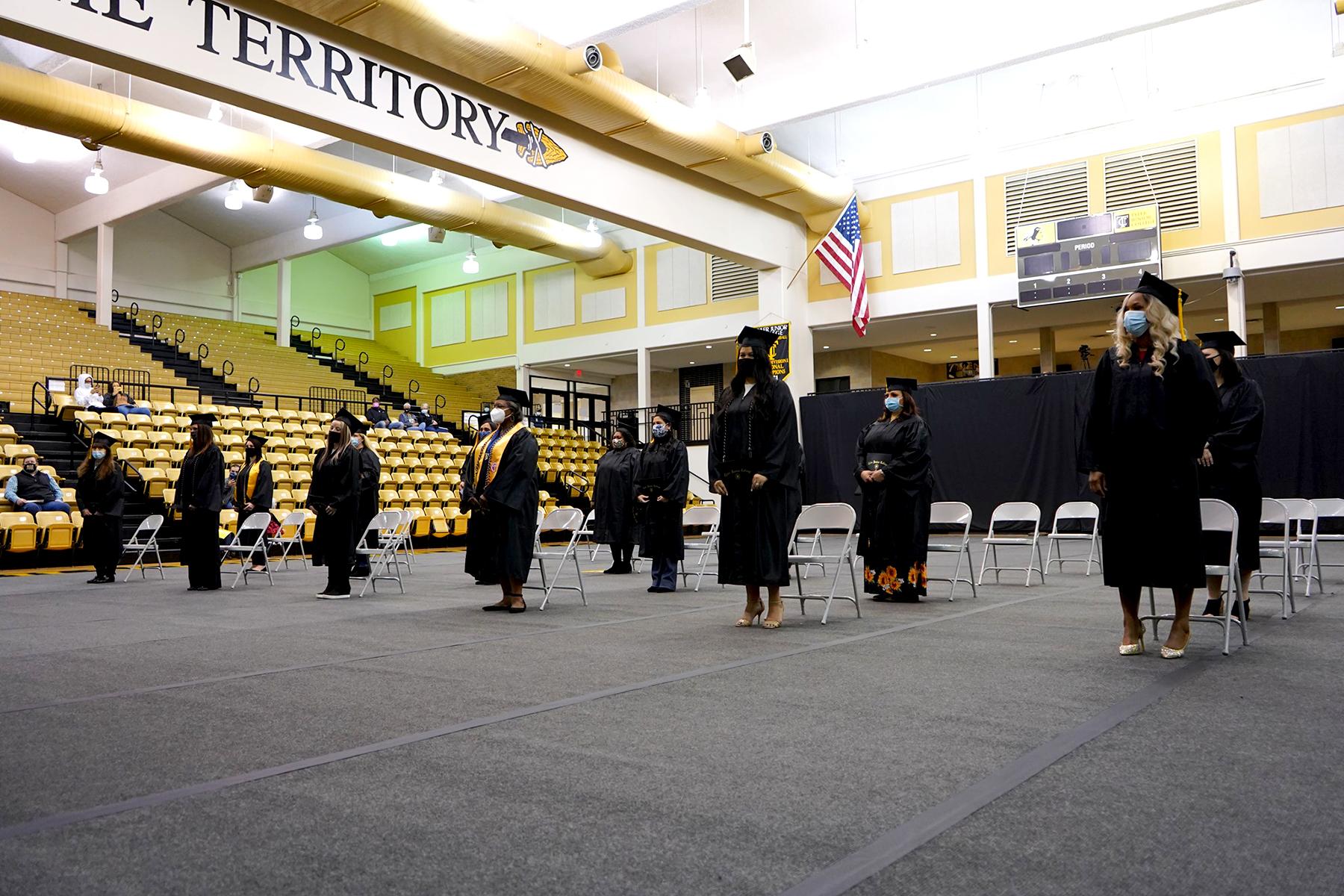 On Monday-Wednesday, TJC recognized 689 December graduates during a three-day series of personal, “micro-graduation style” ceremonies created to allow the students to celebrate their achievement and walk the stage while still maintaining health and safety guidelines.

Donning their caps and gowns, the graduates crossed the stage to receive their diplomas in the presence of TJC President Dr. Juan E. Mejia and Provost Dr. Deana Sheppard. Also present at the ceremonies were Mitch Andrews, vice president for institutional advancement, who emceed the ceremonies; Kim Lessner, vice president for operations, working out logistics; Kevin Fowler, chief human resources officer, assisting the graduates; and Elizabeth Olivier, interim dean of the TJC School of Nursing and Health Sciences, giving remarks to healthcare graduates.

Even behind face coverings, smiles of excitement were evident among the graduates and their families.

“I was not going to miss this,” said Willie Edwards, a medical office management graduate from Clarksville, who took the day off from her job at Parkland Hospital in Dallas to attend the ceremony with her son, Dreylund Edwards, and his fiancée, Abigail Barra.

Edwards spent more than 20 years working in public school offices before deciding to further her own education at TJC.

“I actually found TJC though a Google search,” she said, “and I’m glad I did, because it has been a great experience. The professors were excellent. I learned the correct way to manage a medical office.”

Brittany Riley, of Crockett, was one of the first students to earn an award from TJC’s new culinary arts program. Riley earned a certificate of proficiency in pastries.

“I started out in the culinary program at TSTC (Texas State Technical College) in Waco and transferred to TJC especially for the pastries program,” she said. “I learned a lot from Chef Matson and Chef Dudley, and now I hope to follow in my mom and grandmother’s footsteps and start my own business making wedding cakes.” 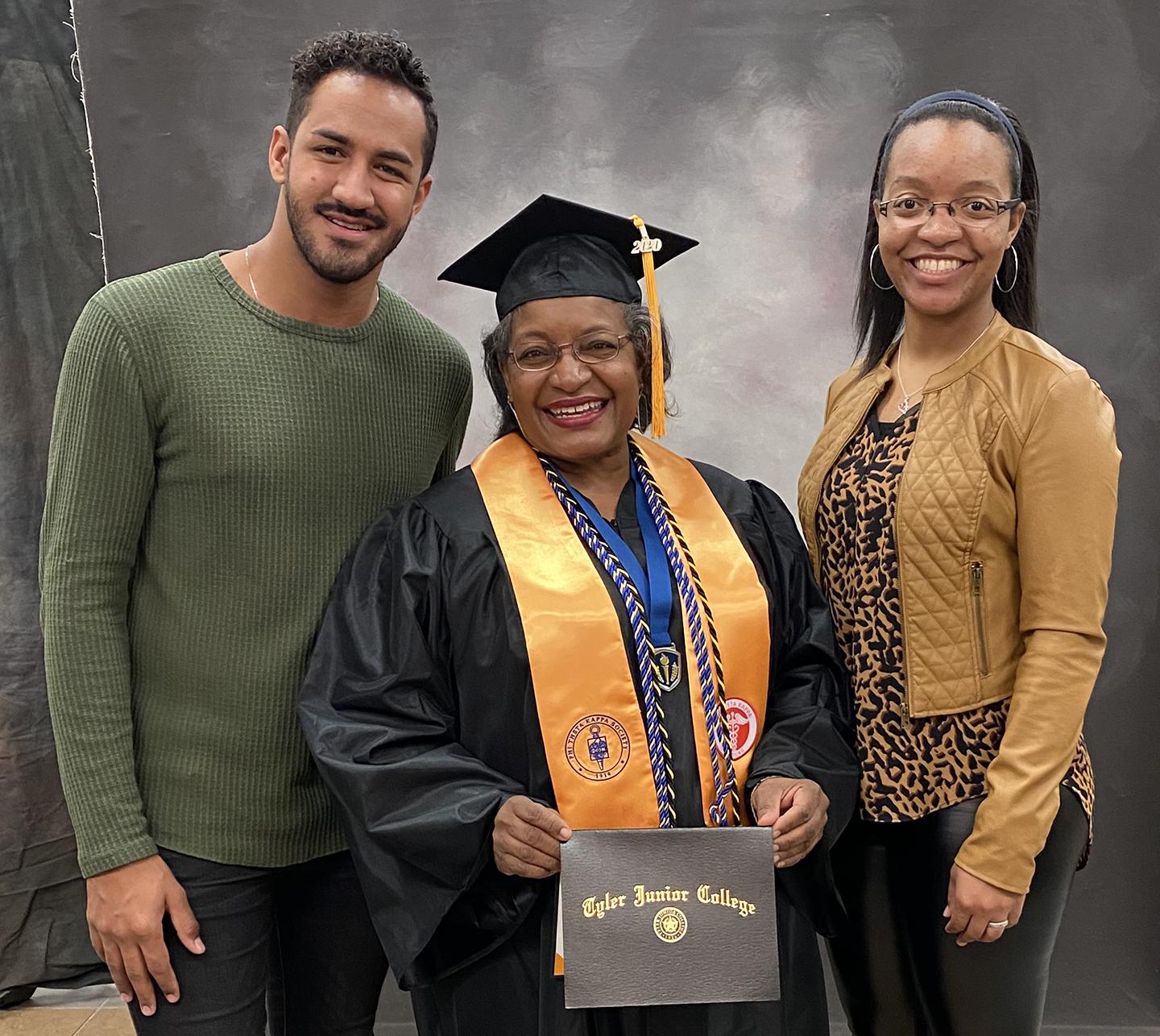 They all graduated the vocational nursing program in August 2018.

Joshua, who worked two years as a nurse at Healthsouth Rehabilitation Hospital, now serves as a Healthsouth marketing liaison, preparing patients for their transition from the regular hospital to the rehab facility. He also works in the ICU unit at UT Health East Texas.

Christiana, who found her calling in elder care, serves as a charge nurse at a nursing center in Malakoff.

Lisa continued her studies at TJC and, on Wednesday, earned her associate degree as a registered nurse. She plans to serve in disaster relief efforts or in the mission field.

“I’m just overflowing with gratitude,” she said. “This college is really a class act and a gem of academia. We love this place and want to make TJC proud because everyone cared so much and poured their hearts into all of us. I wouldn’t change a single thing about this experience.”

Mejia said, “We’ve been looking forward to this time of celebrating our graduates and honoring them for their hard work and success. They have been so resilient and bold to continue their college journey during such a challenging time.”