Dr. Eddie W. Airheart, TJC assistant director of bands and professor of woodwinds, is one of 14 finalists nationwide — and the only finalist from Texas — for The American Prize in Conducting.

The American Prize is a series of national competitions in the performing arts that provides regional, national and international recognition as well as professional development and monetary awards.

“It’s very exciting and I feel very honored to be named a finalist for this award,” Airheart said. “I feel as though I’ve already won just by being among this group of finalists, but I am most proud that this will let people know more about Tyler Junior College and what we’re doing here.”

Each year since 2009, The American Prize has rewarded the best recorded performances by individual artists and ensembles in the United States at the professional, college, university, church and amateur levels. This year’s winners will be announced later in the summer.

“Conducting is an art form,” he said. “There’s more to it than just waving your arms around or being a human metronome. To me, the conductor plays many roles. It’s almost like being the director of a movie. I’m constantly surveying and listening, and I’m constantly teaching. My job as a teacher is to help them to get as close as possible to what the composer intended.”

TJC Director of Bands Jeremy Strickland said, “Dr. Airheart is one of the most musically intelligent people I have every worked with. His passion for learning and teaching is an inspiration to our students and to me. TJC and the Apache Band program are extremely fortunate to have him as a member of our faculty.”

Airheart grew up in Van, then graduated from Mineola High School. After earning his bachelor’s degree in music education from East Texas State University in Commerce (now Texas A&M University-Commerce), he spent the next seven years directing bands in Mineola and Longview.

He directed church music from 1995 until 2012, then completely switched gears and spent a couple of years in hospital administration.

In 2014, music education called again, and he seized an opportunity to pursue his advanced degrees at Texas Christian University.

Airheart earned his doctorate in conducting from Texas Christian University in May 2019 and joined TJC last August.

“I never thought about coming back home to East Texas,” Airheart said, “but as soon as I stepped onto this campus and had my first interaction with the students in summer band, I absolutely fell in love with it. I knew this was where I was meant to be, and these were the students I was meant to teach.”

His duties in the TJC band program include assisting with the Apache Marching Band, conducting the TJC Symphonic Band and co-conducting the TJC Wind Ensemble. He also teaches all private lessons for the woodwind music majors and teaches music appreciation for non-majors.

Teaching during a pandemic
When asked about finishing his first year at TJC during a global pandemic, Airheart was both pragmatic and philosophical.

“We had an incredible fall semester and were into an equally incredible spring semester when this all happened,” he said of the COVID-19 coronavirus that forced the cancellation of all in-person classes and campus events, including spring music performances.

He continued, “There are moments in history when things get thrown into chaos. Suddenly, when those things happen, you can’t see it as a problem but as an opportunity to show how creative and resilient you are; and I saw creativity and resilience in these students.” 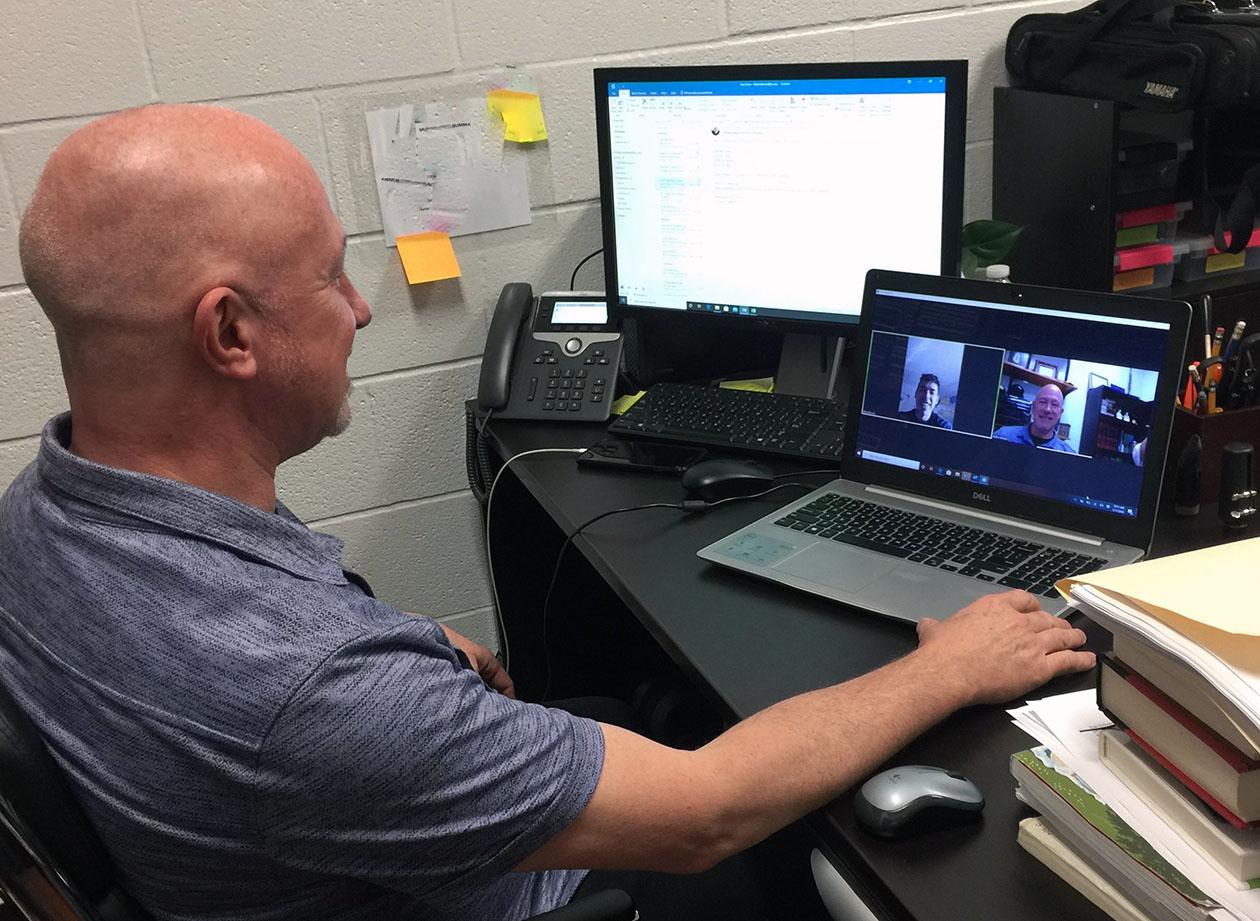 Moving to an online / video conferencing format was obviously necessary, but it brought an abrupt end to the inherent togetherness that comes with being part of a group of performers gathering for rehearsal or a classroom of students exchanging ideas.

“Artists and musicians may seem like free spirits,” he said, “but we do have a tendency to like a little bit of routine. We like our systems and schedules.”

The new routine quickly became logging onto the Zoom platform for classes and private music lessons.

“Let me tell you what I saw in my students,” he said. “I saw students who were faithful and engaged. Some of them lost their jobs and didn’t know what they were going to do, and yet they still came to every music lesson twice a week, on the dot, never late.”

He continued, “I saw them prepare. I saw them struggle. I saw some of them begin to lose the light in their eyes. But then I saw them take a deep breath and push through. They got it done, and they did it beautifully.”

“There were things that I saw during this period that I want to take and transfer into the future,” he said. “I will definitely have my students video themselves playing their instruments more. It provides a good exercise of discipline for them that they don’t necessarily get in the face-to-face format.”

He continued, “Plus, it will help them build a virtual résumé that will take them to the next level, which is ultimately what I am here to help them achieve.”