Fall classes are offered in-person, online or hybrid. Registration is open for Fall 12-week and second 8-week semesters. Masks are required at all TJC facilities.

With almost a year of construction work complete, TJC’s Rogers Palmer Performing Arts Center is coming into sharper focus and showing the promise of the beautiful facility it will become.

Exterior walls and brickwork are going up, rooflines are rising, and the new façade is taking shape, after 11 months of demolition and underground utility, drainage and foundation work to prepare for the new construction.

In June 2019, TJC officials held a groundbreaking for the project that will transform the College’s landmark, Wise Auditorium, which opened in 1957, into a comprehensive performing arts center.

HGR Construction is building the project, with plans by Fitzpatrick Architects.

In April 2018, the TJC Campaign for the Performing Arts was launched to provide $7.5 million in private funding to underwrite the new construction. Later this summer, donors will be invited to a special event for a sneak peek at the progress being made on the facility.

In January 2019, the Robert M. Rogers Foundation committed to a lead gift of $3 million to name the new facility. 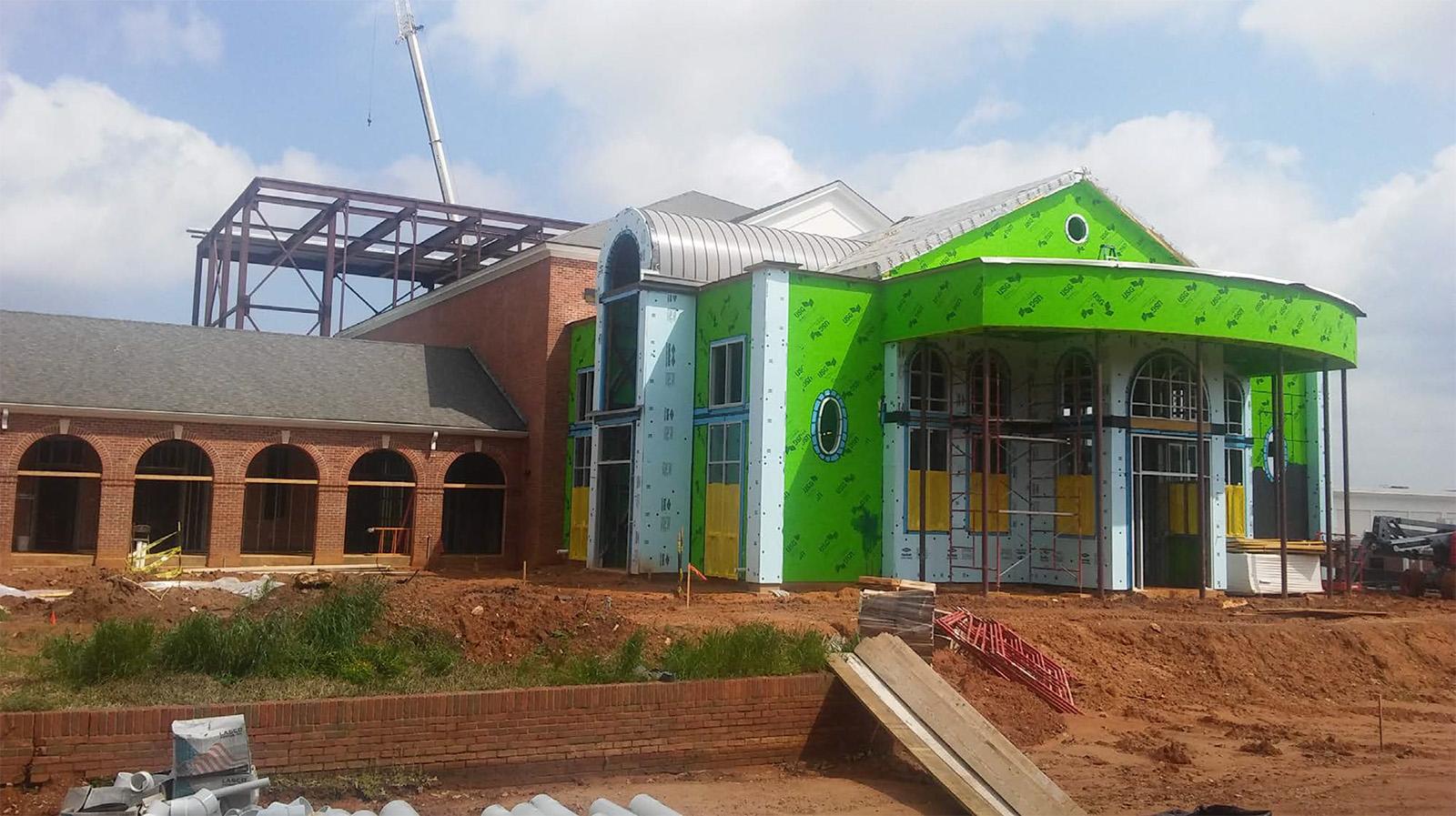 A recent photo shows progress being made in the construction of TJC’s Rogers Palmer Performing Arts Center.

Upon completion in January 2021, the Rogers Palmer Performing Arts Center will be the new centerpiece of TJC’s Cultural Arts District. A weeklong celebration is being planned for the grand opening.

For more than 40 years, the iconic Geese in Flight fountain has been the midpoint between Wise Auditorium and Wise Cultural Arts Center, serving as equal parts meeting place, photo-op location and popular resting spot.

The fountain is being refurbished and will become part of a new water feature near its former location, making room for an outdoor performance space between the two buildings.

The new performing arts center will ensure that TJC can continue to recruit exceptional talent, grow the College’s arts programs and cultivate a thriving arts culture for East Texas by offering high-quality and accessible programming.

The previous facility lacked the resources to support the ever-growing needs of the College’s vibrant performing arts programs, which include The TJC Academy of Dance performances, vocal and instrumental recitals, theater productions and Apache Belles and Band presentations.

Over the years, the auditorium has also hosted numerous activities of TJC, multiple events of local high schools and various visiting productions and programs for enjoyment of the East Texas community. Within the new facility, the auditorium will maintain the historic name of Wise Auditorium.

In recent years, Wise Auditorium has been the host venue to welcome famous alumni who got their start at TJC, including Grammy Award-winner Chris Tomlin, actor Shea Whigham and former NSA Director and CIA Deputy Director Admiral Bobby Inman.

“For more than six decades, this facility has served as a community resource for the arts,” said Mitch Andrews, TJC vice president for institutional advancement and executive director of the TJC Foundation.

“The new Rogers Palmer Performing Arts Center will build on that legacy, support a thriving arts culture in East Texas and showcase TJC’s exceptional performing arts programs. We sincerely thank our dedicated steering committee for their leadership, vision and generosity.”

For more information on the TJC Campaign for the Arts, go to TJC.edu/ArtsCampaign.