For Dr. J. Blair Blackburn, Tyler Junior College has long been a source of pride and inspiration, be it personally, professionally or even architecturally.

“The roots for my calling to higher education leadership were first planted on the grounds of Tyler Junior College and watered by the influence of then TJC Director of Student Activities, Emma Lou Prater,” he said. “With TJC being one of the most beautiful community college campuses in America, there is no doubt that the iconic beauty of Jenkins Hall fueled my future interest in college architecture and construction work.”

He is currently serving as the 13th president of East Texas Baptist University in Marshall. Prior to joining ETBU in June 2015, he served at four other institutions of higher learning, including Dallas Baptist University, the University of Texas at Tyler, Lon Morris College and Paris Junior College.

Blackburn utilizes his unique passion for master planning, architecture, landscape and interior design to beautify and renew ETBU’s campus, as he did during his 20-year tenure at Dallas Baptist University.

Blackburn’s early interest in architecture and design was sparked by his parents’ vocations. His father, Jerry, was a registered professional civil engineer; and his mother, Nell, was an interior decorator.

His first capital building project at Dallas Baptist came in 1998, when he served as project director for the construction of Spence Hall, a 47,000-square-foot women’s residence hall modeled after the Christopher Wren Building from the College of William and Mary in Williamsburg, Virginia.

“The Wren Building is known as the oldest academic facility, still in active use in America today,” Blackburn said. “From this project, I fell in love with Collegiate Georgian architecture, and thus began my career passion for college campus development.” 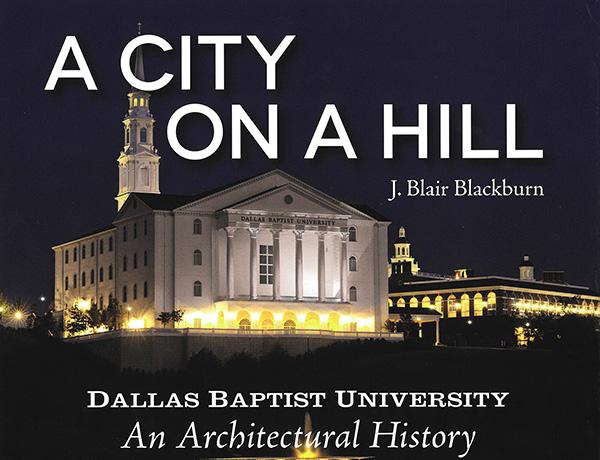 In his 2014 book, “A City on a Hill: An Architectural History of Dallas Baptist University,” Blackburn detailed how, in developing a master building plan, DBU took inspiration from the neoclassical Georgian style of American colonial architecture and replicated many historic buildings into modern, state-of-the-art facilities.

Blackburn chronicled his experience and love for these aspects of university development in his 2014 book, “A City on a Hill: An Architectural History of Dallas Baptist University.”

“The creation of the book was initially envisioned as we developed Dallas Baptist University into one of the most beautiful and scenic university campuses in the nation,” he said. “Through the transformation of the campus, it became evident that the university, its faculty and students were being impacted by the facilities and grounds. I came to understand the truth in what Winston Churchill said: ‘We shape our buildings and our buildings shape us.’”

He added, “I began to realize that we needed to share the story of DBU’s transformation with our greater constituency and others in higher education. I felt it was my responsibility to highlight how God used our construction leadership team to create the majestic campus DBU is today.”

In the book, Blackburn detailed how, in developing a master building plan, DBU took inspiration from the neoclassical Georgian style of American colonial architecture and replicated many of those historic buildings into modern, state-of-the-art facilities.

For instance, the John G. Mahler Student Center is modeled after Independence Hall in Philadelphia; the Patty and Bo Pilgrim Chapel is a blend of elements from First Baptist Church in America in Providence, Rhode Island, as well as the Indiana State House and the U.S. Supreme Court; and campus residences are replicas of brownstone homes commonly found in Colonial Williamsburg in Virginia.

“Now, God has called us to transform East Texas Baptist University,” Blackburn said. “He has gifted us with a 253-acre picturesque palette to enhance its beauty for the glory of God through the Georgian Collegiate architecture and manicured landscape nestled in the Piney Woods. We are seeing the lives of ETBU students molded as they study inside the buildings and as they walk upon the Hill of East Texas Baptist.”

Blackburn’s TJC years
Almost three decades into his career in higher education, Blackburn still credits TJC for helping him find his footing as a leader and scholar; but more importantly, he said, it was also TJC that led him to his life’s calling to influence the lives of college students — and to the woman who would become his wife.

A native of Minden, Louisiana, Blackburn returned to his parents’ home state of Texas in 1987 to enroll at TJC and join the Apache Cheer Team.

“My life at TJC was possible because God called me,” he said, “but He used a little lady with spunk and fire named Emma Lou Prater to guide me.”

At the time, Prater headed the College’s student life program and cheerleading squad.

“Emma Lou is an absolute treasure,” Blackburn said. “She took a 135-pound, dripping-wet kid from Louisiana, picked me out of 100 cheerleaders in 1987, and said she wanted me on the squad. She chose me because God chose me to be at Tyler Junior College.”

With Prater’s guidance, Blackburn became actively engaged in student life at TJC in his freshman year and was elected freshmen class president and homecoming king runner-up. During his sophomore year, he served as cheer captain, Student Activities student assistant, president of the Student Senate, and parliamentarian of the Texas Junior College Student Government Association. He was also a member of TJC’s Alpha Omicron Chapter of Phi Theta Kappa, the national honor society for community college students.

“More than cheerleading,” he said, “Emma Lou encouraged me to become engaged in campus life. She challenged and encouraged me to make the most of my college experience, and student life is shaped under my leadership today because of how Emma Lou taught me to develop a student life program.”

Blackburn also named government professor Steve Burket as one of his TJC mentors.

Blackburn learned another valuable lesson outside the classroom when, in the fall of his sophomore year, as he walked into Hudnall Hall to pick up a girl for a date, he crossed paths with freshman Michelle Hackney.

“She had her Bible in her hand,” he remembered, “and she said, ‘I’m going to the Baptist Student Union (BSU).’ I knew that was where I needed to be, and I knew she was the girl for me; so, I broke up with the girl I was dating and asked Michelle out the next week.

Blackburn has returned to TJC several times over the years.

In October 2019, he participated in the inauguration of TJC’s seventh president, Dr. Juan E. Mejia.

“Michelle and I are proud to call Juan Mejia and his wife, Meela, our friends,” he said. “I’m so grateful that God called Juan to be president of Tyler Junior College. I shared in my prayer at his inauguration about him being a man of God, and he is. He is an absolute reflection of the fruit of the spirit in (the Book of) Galatians.”

Mejia said, “Dr. Blackburn is among the most respected leaders in higher education throughout the country, and we are very fortunate to have him here, in East Texas, providing leadership at ETBU and for our communities. He is the consummate professional, and in addition to the collaborative work between TJC and ETBU, I am blessed by his friendship. Meela and I have the utmost respect for the Blackburn family and the ETBU leadership team.”

Blackburn has been honored twice by the TJC Alumni Association, as Valuable Young Alumnus in 1999 and Distinguished Alumnus in 2019.

“Michelle and I are so grateful for our time at Tyler Junior College, and our hearts just meld with this institution,” he said.