“Part of our academy training involves communication, which includes assessing a scene and then writing and reporting on what they observed,” said Doyle Lynch, TJC academy director.

Lynch said the stakes are high, since information in written police reports can be a deciding factor on whether a judge issues an arrest warrant or what verdict is reached by a jury.

To aid in the cadets’ training to be more descriptive, TMA Director Chris Leahy provides TJC cadets with a half-day crash course in observation and verbal communication.

“We have them examine some artwork, which trains them not just to focus on the main point but also on the scene as a whole,” Leahy said. “It will be the same when they go to a crime scene: You don’t just focus on a dead body. You also need to see where things are and where they aren’t, since there could be important clues just by noticing that something is missing or has been moved.”

Leahy opened Monday’s session by describing the four A’s they would focus on: assessing a scene, analyzing it, articulating what they see, then adapting to the situation.

With the assistance of Derek Frazier, who is the museum’s interpretation manager and a TJC adjunct English professor, Leahy showed a series of sketches and paintings in the museum classroom.

Upon seeing a painting of what appeared to be a wounded matador, the students chimed in:

“He’s lying down, but he looks peaceful — like he was placed there.”

“He’s holding a flag, and his sword is beside him.”

Frazier responded, “Are you sure he’s really a bullfighter? Maybe he’s been to a costume party. Is it his blood or from someone else? With no one there to ask what happened, you can’t be sure of anything. You can’t assume anything without more information.”

After looking at a few more paintings, the class moved into the art gallery to see an exhibit by photographer Laura Wilson. The Wilson exhibit, entitled “That Day,” is a collection of people and places in the American West, from cowboys and lawmen to hometown parades and football games.

The cadets paired off and took turns looking at a photo for six minutes and taking notes on what they saw: time of day, location and surrounding situation, how many people, what they were wearing, any identifying attributes or objects (dark hair, long hair, skin tone, moustache, hat, belt buckle, etc.).

At the end of the six minutes, the cadets turned away from their assigned photo and, using their written notes, gave a verbal report on their findings. 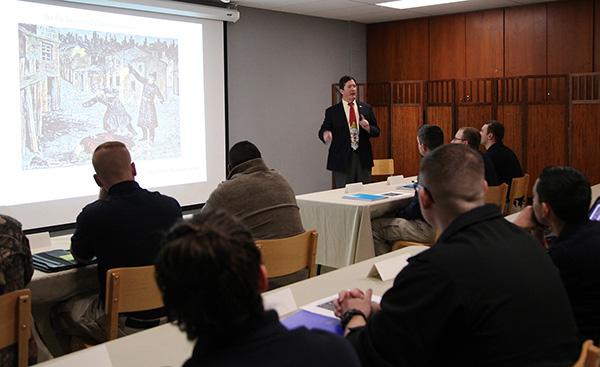 Matthew Ranshaw, a cadet with Tyler Police Department, said, “I think this definitely makes you pay a lot more attention to detail. A lot of time, you’ll focus on just the center and what’s the shiniest object but not pay attention to everything else around it. We have to be able to describe everything we see — and do it well enough on the report that, if it gets taken to court, exactly what we put down on paper will match the scene. If anything, you’d rather be too detailed than not provide enough.”

After the gallery exercise, the group returned to the classroom for some final thoughts from Leahy.

“You did very well,” he told them. “In quick summary, you’ve got to make some fast judgments and remember to establish a pattern of how you’re going to look at the scene. It’s very important to always go in with fresh eyes and no preconceived ideas about what has happened. And remember, when you come upon a scene, it could be a life-and-death situation.”

For more information on the TJC Law Enforcement Academy, go to TJC.edu/LawEnforcement.