Metke also handed over the keys to one of his antique cars to benefit TJC scholarships.

Metke and his wife, Donna, were joined by TJC board members, administrators, faculty, staff and students for a gathering at the new street sign marking Metke Drive, formerly Adair Street, which connects Palmer and Blackwell avenues on the east side of the TJC main campus.

“I thank Dr. and Mrs. Metke for their service to TJC and for 30 years of friendship,” TJC President Dr. Juan E. Mejia said. “They are some of the best leaders you’ll ever meet; and for the success that we stand on as a College, a lot of the credit goes to the Metkes and their time here.”

Trustee David Hudson was TJC board president when Metke was hired in 2007.

Metke said, “I’ve never worked at a place like this. I’ve been at five colleges, and the greatest honor of our lives was to be at Tyler Junior College. I’ve never known a better board, city, leadership team or College like Tyler. What an incredible honor it’s been.” 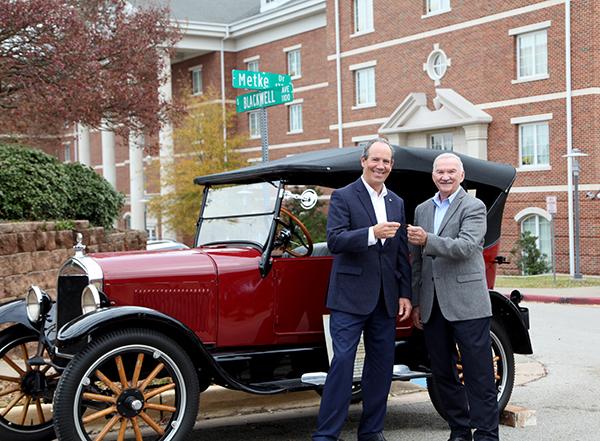 Dr. Mike Metke (right) presents the keys to his 1926 Ford Model T to Claude Henry, president of Texas Bank and Trust of Tyler, who recently won the car in a drawing to benefit the TJC Promise scholarship program.

Before he retired in June, Metke and his wife, Donna, donated their 1926 Ford Model T to the College, for a raffle to benefit TJC scholarships.

After six months of ticket sales and anticipation, a drawing was held Friday, Nov. 15, at the Energy Center at TJC West.

The $21,420 raised from the Model T raffle will go toward the TJC Promise scholarship fund.

Claude Henry, president of Texas Bank and Trust of Tyler and member of the TJC Foundation Golf Tournament Advisory Committee, was not present when his winning ticket was drawn, so Metke presented him with the keys to his “new” car during Thursday’s street-naming ceremony.

Henry said, “This is an unbelievably beautiful car, and it’s a real sense of responsibility that I’m going to take on because I know he’s given it so much tender loving care.”

To Metke, Henry added, “I want to continue the legacy that you’ve created with this car and with everything you’ve done in Tyler and with TJC.”

Metke said, “I’m really excited that the winner is someone who’s been such a partner to the College and supported TJC, and a real friend of mine. I’m pleased that it’s going to a good home.”

He then offered a little back history on the car, which was the first Ford model built using the assembly-line system that enabled the mass production of automobiles.

Metke said, “Just to tell you a couple of things about the car and about TJC: They were both born in 1926, which was a revolutionary time. The Model T won the 20th Century innovation award for Henry Ford; and at the same time, TJC was born to give people affordable access to education close to home and be a people’s College to change lives.”