On-campus offices are open to students. Online registration is available through Apache Access. Fall classes are offered in-person, online or hybrid. Masks are required at all TJC facilities.

If you’ve had your teeth cleaned in East Texas during the last 50 years, your hygienist was most likely a graduate of Tyler Junior College.

Since 1969, the TJC Dental Hygiene Program has not only improved the lives of its graduates, it has also helped generations of dental patients across the region who have benefited from their care and expertise.

Carrie Hobbs, department chair and professor, said, “More than half of our graduates stay and work in the East Texas area, including Tyler, Jacksonville, Longview, Marshall, Henderson and Rusk. Others go to the metropolitan areas such as Dallas and Houston.”

Hobbs graduated from the program in 1977. After several years as a practicing hygienist, plus a few more years teaching high school English and health, she returned to TJC as a full-time faculty member in 1995 and became department chair in 2000.

“Most of our faculty members are also graduates of our program,” she said, noting that six of seven full-time and 12 of 16 part-time faculty are TJC graduates. 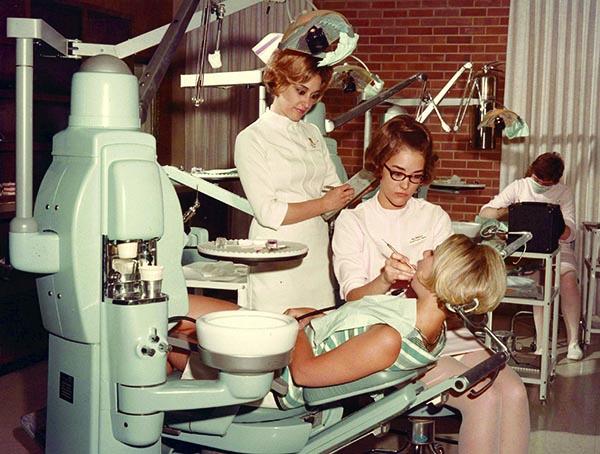 The TJC Dental Hygiene program opened in 1969, in the George R. Pirtle Technology Center on the TJC main campus.

The program has come a long way since its humble beginning in TJC’s George W. Pirtle Technology Center.

“When I was in the program, the clinic had 18 dental chairs lined up in two rows of nine,” she said. “It was so crowded that, if you leaned your patient back with the chair lever, you could barely get yourself between your patient’s head and the feet of the patient behind you.”

Cramped quarters became a thing of the past in January 2015, when the new Robert M. Rogers Nursing & Health Sciences Center became a reality.

The clinic is open to members of the community to come in for dental cleanings, oral examinations, X-rays and sealants. Services are provided by dental hygiene students under the supervision of a general dentist and registered dental hygienists.

Hobbs attributes the program’s longevity to its ability to evolve, always with an eye toward what’s next.

“The new building was a longtime dream,” she said, “and after we moved into it in January 2015, I told my assistant Tina Morrison, ‘OK, my next thing is to figure out how to get a bachelor’s degree.’”

The very next day, Hobbs said, TJC’s then-Provost Dr. Juan E. Mejia walked into her office, told her his former institution South Texas College offered bachelor’s degrees, and that he and then-President Dr. Mike Metke had been discussing what four-year degree might be a good fit for TJC.

“He said they thought that one area that might fly in Tyler would be dental hygiene,” she said, “and I immediately said, ‘Yes!’”

No other four-year dental hygiene program existed between Dallas and Shreveport, so they felt confident that TJC could fill an area need. Plus, since the Rogers Nursing & Health Sciences Center had just opened, the school had the latest equipment and technology already on site.

TJC leaders put the plan in motion and began pursuing approval from the Texas Legislature. Legislative action on the issue was first granted in late 2015 to create a Bachelor of Science in Dental Hygiene degree program at TJC.

Numerous public entities, including the city of Tyler and Tyler ISD, passed resolutions supporting TJC’s drive to offer the degree; and legislative companion bills amended the Texas Education Code to allow the Texas Higher Education Coordinating Board to approve the program for TJC.

Both bills passed the Texas Legislature, and the coordinating board subsequently approved the program, making TJC the first community college in Texas to offer a Bachelor of Science degree.

The program opened in August 2016 under the direction of Julie Mettlen; and during Fall Commencement in December 2017, Michelle Trammell of Tyler, Shannon Kassaw of Palestine and Amanda Camp of Lufkin crossed the stage as its first graduates.

“Dental hygiene is a rigorous program worthy of a baccalaureate degree,” she said. “It’s much more than just a learned skill. There is a tremendous emphasis on pathology, periodontology and pharmacology. We begin assessing the patient as soon as they walk in the door, and our assessments are based on the knowledge that we have.”

That knowledge mostly involves the oral cavity, she said, but hygienists must also be aware of their patients’ medical history because sometimes they take medications or have conditions that would require a different type of treatment.

That awareness comes from years of studying scientific literature.

“We are also educators for our patients,” Hobbs said. “Above all, our main goal is for them to know how to maintain their oral health, which has a profound effect on their overall health.”

The TJC Dental Hygiene Program has provided the East Texas region with educated health care professionals for the past 50 years. The future looks even brighter – and healthier – as TJC continues to create graduates who live, work and make a difference in our community.

For more information, go to TJC.edu/DentalStudies.