The TJC Academy of Dance will present its 31st annual production of the classic holiday ballet, “The Nutcracker,” Friday-Sunday, Dec. 6-8, in Caldwell Auditorium, located at 300 S. College Ave.

Admission is $15-25 for reserved seating. Main seating is $10 for seniors ages 65 and over, TJC students and employees, and children under age 12.

Tickets are available online at TJC.edu/Nutcracker.

The production is under the direction of Carolyn Hanna, director of the TJC Academy of Dance.

“‘The Nutcracker’ is such a beautifully magical ballet,” Hanna said. “I love changing the choreography each production, so every year there’s something new to see.”

She continued, “This year we have more than 150 dancers and actors, and you can definitely feel the excitement on the stage. These dancers have been rehearsing since September, so the end result will be something quite remarkable. With the TJC Academy of Dance, TJC Dance Department and other excellent dancers from around East Texas, we are delighted to present this production to the community every December.”

Rayleigh Vendt is originally from St. Louis, Missouri, but began her serious ballet training when she moved to Tyler and joined Ballet Tyler. She trained in ballet and pointe with Kym Lanier and Thereza Bryce-Cotes and started her classical modern training with Shurrell Wiebe.

With Ballet Tyler, she performed in ballets such as “Cinderella,” “Beauty and the Beast,” and “Cats,” and the role of Wendy in “Peter Pan.” When she was younger, she performed as an angel in TJC’s production of “The Nutcracker.”

“Having Rayleigh Vendt join us again this year as our principal guest artist is completely thrilling,” Hanna said. “She is an incredible dancer, and the fact that she trained here with our same TJC professors years ago is a testament to their incredible instruction.”

Hanna continued, “It shows the dancers in our academy and dance department that, with hard work and determination, obtaining your goal is absolutely possible. This is a great opportunity for East Texans to see these extraordinary dancers from Oklahoma City Ballet.”

Vendt went on to train at Lisa Slagle’s Ballet Academy of Texas in Coppell, then joined Cincinnati Ballet as a trainee in 2012 and performed roles with the company in Septime Webre’s “Alice (in Wonderland)” and Victoria Morgan’s “Romeo and Juliet.” She was a part of Ballet Austin II from 2013-2015 where she danced George Balanchine’s “Agon” and Nick Kepley’s “Season of Innocence.”

Since joining Oklahoma City Ballet as a corp de ballet member in 2015, she has since performed in many ballets, including featured positions like the Kissing Girl in Agnes DeMille’s “Rodeo” and as the Russian Girl in George Balanchine’s “Serenade.” She has most recently danced in the pas de trois in Robert Mills’ “Swan Lake” and performed in Helen Pickett’s “Petal.”

Walker Martin trained with Penny Askew at the Western Ballet Academy in Clinton, Oklahoma, and performed with its affiliated pre-professional Regional Dance America company, Western Oklahoma Ballet Theatre. He also studied in New York City on scholarship at the Joffrey Ballet School and American Ballet Theatre (ABT) Summer Intensives and was named an ABT National Training Scholar from 2009 to 2011.

Martin continued his training at Houston Ballet’s Ben Stevenson Academy, where he performed with Houston Ballet in Ben Stevenson’s “The Nutcracker” and Stanton Welch’s “Cinderella” during the 2011/12 season. He then danced with Ballet Quad Cities for a season before joining Oklahoma City Ballet in 2013. He was promoted to soloist in 2016.

With Oklahoma City Ballet, Martin has performed lead and feature roles, including The White Rabbit in Septime Webre’s “Alice (in Wonderland),” Melancholic in George Balanchine’s “The Four Temperaments,” The Champion Roper in Agnes de Mille’s “Rodeo,” Benvolio in Robert Mills’ “Romeo and Juliet,” The Jester in Mills’ “Swan Lake,” Hans in Mills’ “The Nutcracker,” Puck in Mills’ “A Midsummer Night’s Dream,” as well as the title role in Paul Vasterling’s “Peter Pan.” 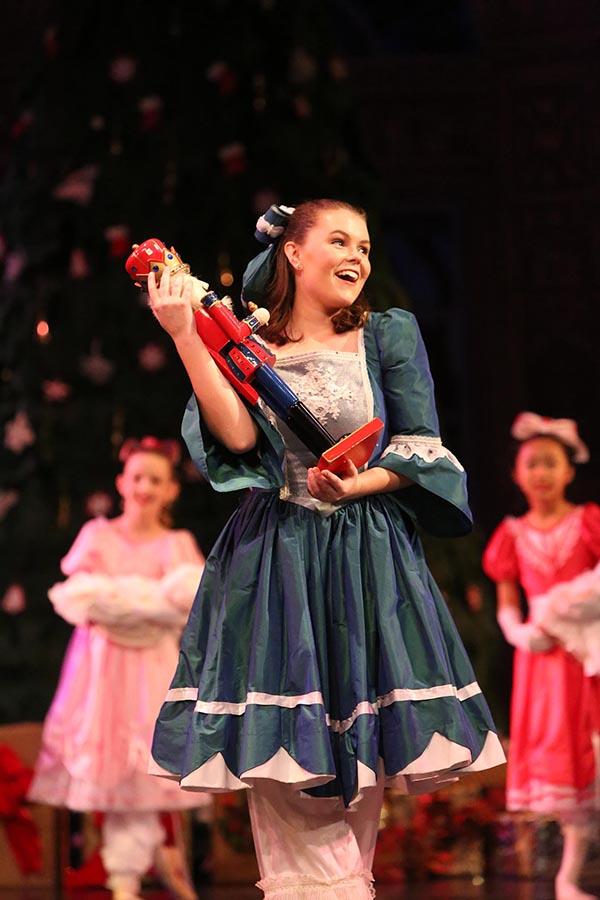 Brunch and crafts with the ‘Nutcracker’ cast
A new feature this year, “Clara’s Christmas Morning,” which includes brunch and crafts with members of the “Nutcracker” cast, will be held 9:30-11:30 a.m. Saturday, Nov. 16, at the Potpourri House restaurant, located at 3320 Troup Highway in Tyler.

Guests will have a chance to visit with the “Nutcracker” cast members during a special morning of snacks, holiday stories, Christmas crafts and ballet.

Tickets are $25 per person – or $40 for the VIP package, which includes a commemorative coloring book, reading book and autographed photo.

For more information, or to make reservations, contact Carolyn Hanna at 903-510-2483 or email chan3@tjc.edu.