The formal ceremony was attended by the College’s Board of Trustees, students, faculty, staff and administrators, as well as former TJC presidents, state and local dignitaries, family and friends. 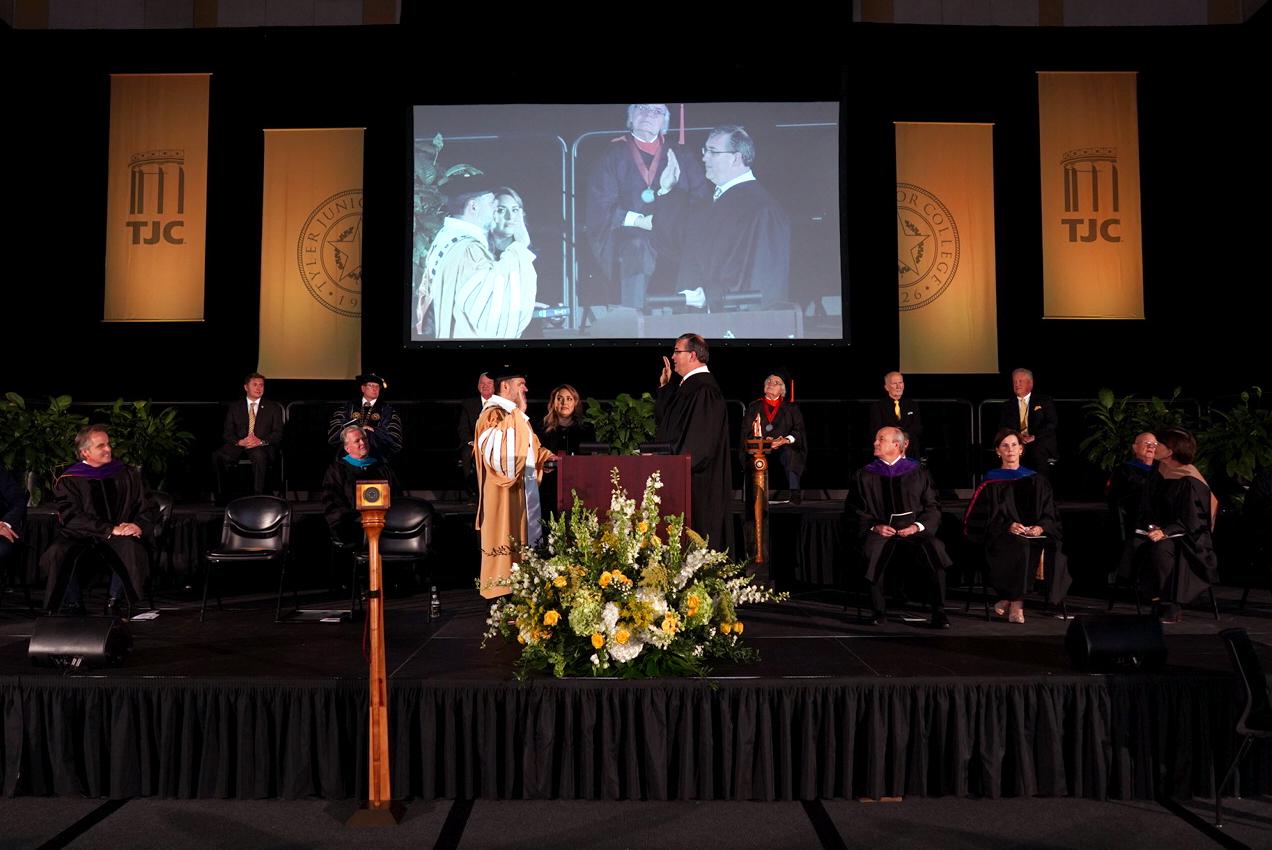 The processional included delegates from other colleges and universities, community ambassadors, and TJC faculty and staff.

The Board of Trustees welcome was given by Rohn Boone, TJC board first vice president.

Metke highlighted his 30 years as a mentor, colleague and friend of Mejia, beginning when they worked together to create South Texas College in the Rio Grande Valley.

“From his bio, you know that Juan is highly educated and he’s smart, but he is so much more that what is on his résumé,” Metke said. “The longer I live, the more I realize that there has to be more than IQ and work experience. There has to be a spark and a sparkle. So, while a person’s IQ is important, I Can is a thousand times more important. And you’re going to get a lot more IQs and I Cans with Juan as leader.”

Metke continued, “It’s a day to rejoice for a new era at TJC. I couldn’t be more pleased for TJC and for the Tyler community.” 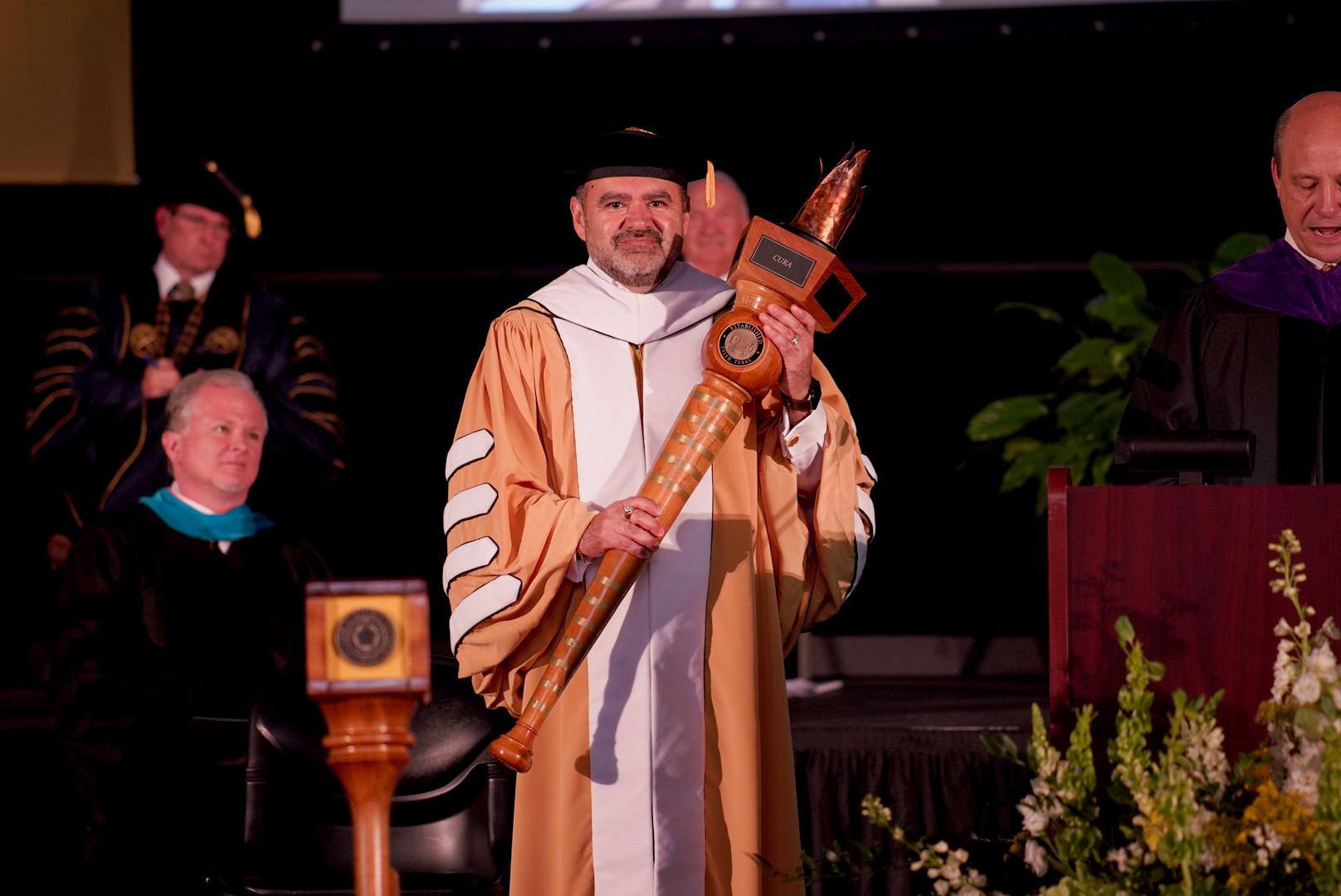 A new presidential mace was created especially for Mejia's inauguration.

“Today, we celebrate every one of you who is in attendance today, who plays an important role in the fabric and history of Tyler Junior College, and we thank you for being here,” Brookshire said. “I am proud to represent the trustees of this institution as we celebrate, recognize and honor our president, only the seventh president of Tyler Junior College, Dr. Juan Mejia.” 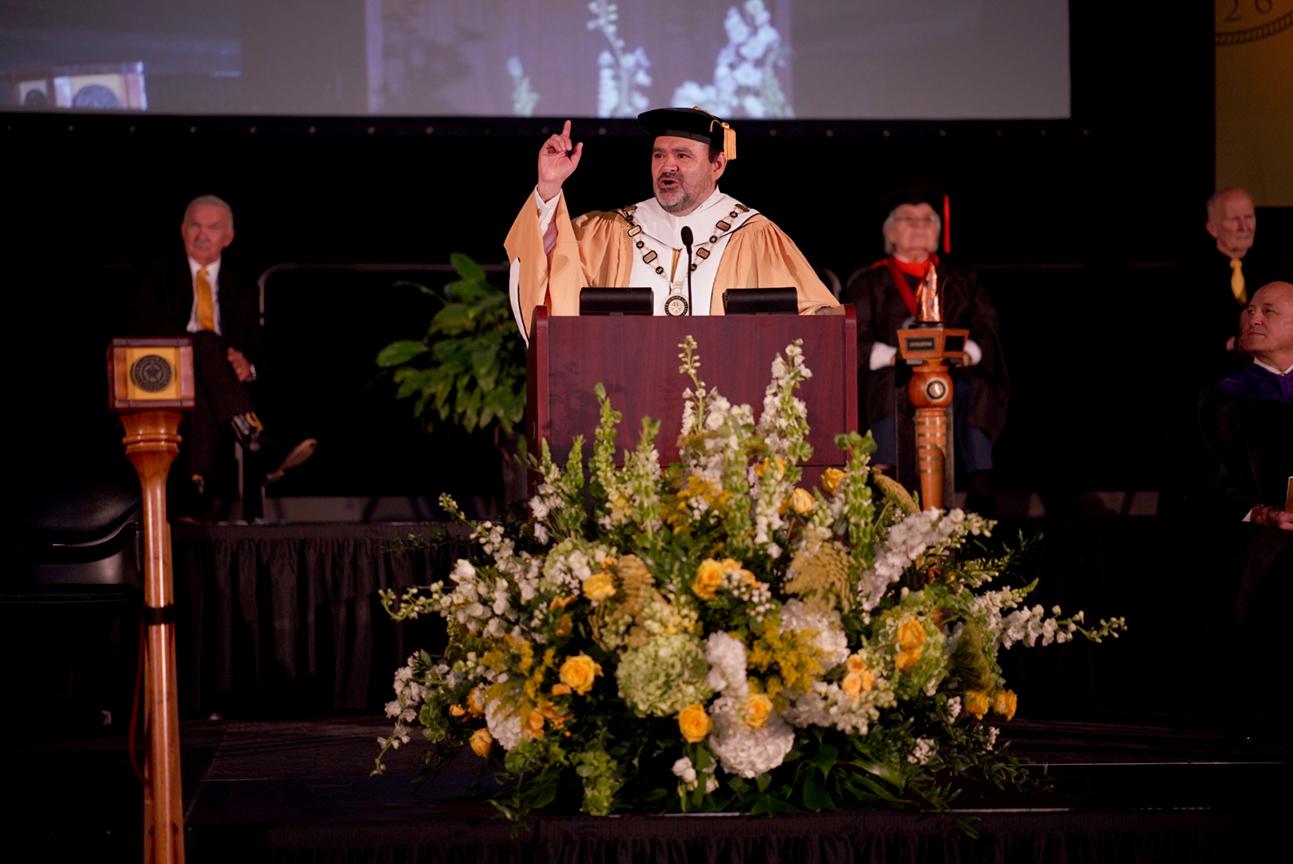 In his inaugural address, Mejia said, “It is a great day to be at Tyler Junior College and in this community.  There is not a community that is more giving or more philanthropic than ours, and that is because of each and every one of you, your leadership and the work that you do.”

He continued, “In the words of the great philosophers and poets, Eddie Van Halen and Sammy Hagar: ‘It’s all about right here and right now!’ It is about what we are able to accomplish together. As a united Tyler Junior College, the future of our region will be in good hands; and together, we are going to do great things for others.”

“Let every man and woman of this great state and beautiful country know in their hearts and minds, whether they wish us ill or wish us well, that we are willing to pay any price, bear any burden, support all friends and oppose all foes, to ensure that the communities of East Texas have access to the finest junior college in the country.”

State Rep. Matt Schaefer provided the spoken benediction, followed by the Chamber Singers with the choral benediction, “The Lord Bless You and Keep You,” under the direction of Dr. Eric Posada, TJC director of choral music.

The TJC Chamber Singers, Apache Band, Wind Ensemble, and everyone in the audience closed the ceremony with the school’s Alma Mater.