This is the second in a series of articles leading up to TJC’s presidential inauguration on Friday:

As Tyler Junior College prepares to inaugurate its seventh President Dr. Juan E. Mejia on Friday, a great deal of care has been taken in incorporating symbolism that reflects the College’s 93-year history and its core values.

A new presidential mace and chain of office have been created especially for the occasion, and music has been selected to reflect Mejia’s heritage and personality.

Presidential mace and chain of office
The mace and the chain of office are customary ceremonial symbols in academia. They were custom-made for this inauguration and will be used in future commencement ceremonies.

The mace was crafted from cherry wood by East Texas artisans.

Embedded in its base is a silver dollar from 1926, the year TJC was founded.

The College seal is embedded just below the pentagon-shaped crown, which symbolizes TJC’s five core values: unity, caring, integrity, empowering and excellence. Each value is engraved in Latin, with lettering in gold on a black field.

The crown is topped with a handmade copper flame, which represents both the flame of knowledge and the passion of TJC’s leadership for service to its students and communities.

The chain of office is made of antique bronze with black enamel accents, in honor of TJC’s school colors, black and gold.

The chain of office is made of antique bronze with black enamel accents, in honor of the TJC school colors, black and gold.

The medallion, its most prominent feature, bears the College seal and is flanked by smaller stars mirroring the seal and symbolizing the Lone Star State.

The reverse side of the medallion is engraved with TJC’s founding year of 1926 and surrounded by roses, in recognition of TJC’s strong ties to the city of Tyler.

The links of the chain are engraved with the names of the previous six presidents.

Ceremonial music
Music is very important to Mejia, who has played trumpet, baritone, guitar, bass guitar and electric bass. He served as drum major his junior and senior years at McAllen High School.

Adding to the pageantry of the event, the groups will perform “Hail the Champions,” by James Curnow, “Olympic Fanfare and Theme” by John Williams, and “Procession of the Nobles” by Rimsky-Korsakov.

Highlighting Mejia’s South Texas roots, the program will include “Symphonic Dance No. 3: Fiesta,” by Clifton Williams; and “Oracle,” a composition in 7/8 time, will recognize his role as TJC’s seventh president.

The program will include “National Emblem March” and “Battle Hymn of the Republic,” in celebration of Mejia as a product of the American dream.

The TJC Chamber Singers will perform the TJC alma mater and a choral benediction, “The Lord Bless You and Keep You,” under the direction of Dr. Eric Posada. 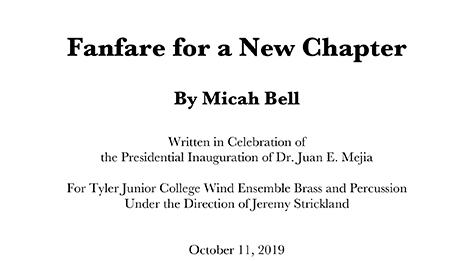 On Friday, the TJC Apache Band and Wind Ensemble will premiere “Fanfare for a New Chapter,” a piece composed by TJC Music Professor Micah Bell, especially for Mejia’s inauguration.

Smith County Judge Nathanial Moran will administer the oath of office, and Mejia will give the inaugural address.

Admission to the event is free, and the public is invited to attend.