Widely recognized as country music’s senior authority, Malone is an author, musician and noted historian of traditional American musical forms. His groundbreaking work, “Country Music U.S.A.,” published in 1968, was the first definitive and still stands as the most authoritative academic history on the subject.

For more than 30 years, Ken Burns and his collaborators have created some of the most acclaimed historical documentaries ever made, including “The Civil War,” “Jazz,” “Baseball,” “The National Parks: America’s Best Idea,” “The Dust Bowl,” “The Roosevelts: An Intimate History” and “The Vietnam War.”

“Country Music” chronicles the history of a uniquely American genre, from southern Appalachia to Texas, California honky-tonks to Nashville’s Grand Ole Opry. It was directed by Burns, written by Dayton Duncan, and produced by Duncan, Burns and Julie Dunfey.

Burns and his associates credit Malone’s book as their roadmap for crafting the series.

In a Wisconsin State Journal article, producer and writer Dayton Duncan said he relied heavily on Malone’s book for his initial research.

“Obviously, you want to go to the Bible first,” Duncan said. “When he wrote ‘Country Music U.S.A.’ there weren’t many, if any, scholarly works about this thing that was once called hillbilly music.”

They spent eight years researching and producing the film, conducting interviews with more than 100 people, including 40 members of the Country Music Hall of Fame, 20 of whom have since passed on.

The film uses more than 3,200 photographs and over two hours of archival footage, including rare and never-before-seen photos and footage of Jimmie Rodgers, Johnny Cash and others.

About Bill C. Malone
Malone, who was born in Tyler and grew up in Lindale, graduated from TJC in 1954. 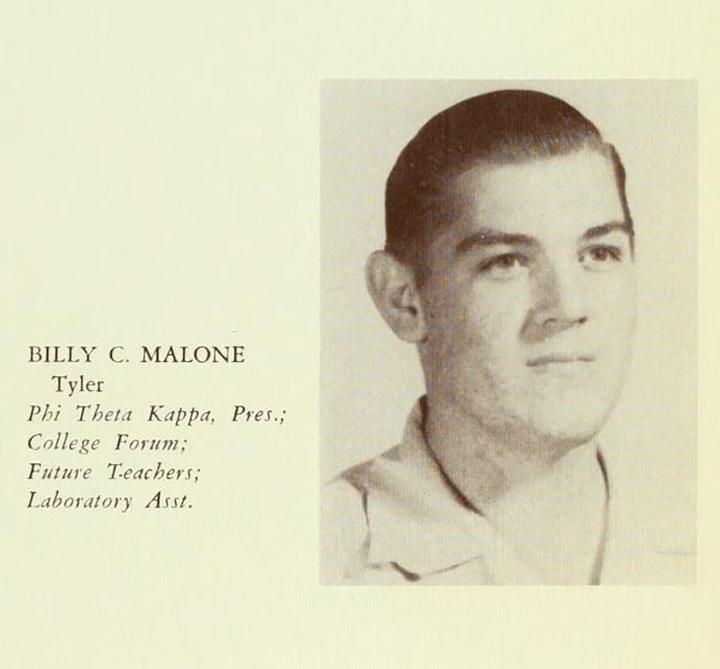 According to The Apache yearbook from that year, he served as president of TJC’s Alpha Omicron Chapter of Phi Theta Kappa and was a member of the College Forum and Future Teachers.

In an email to TJC, his wife, Bobbie, said, “Bill’s best professors ever, as he enjoys telling folks, were at TJC: Dr. J.C. Henderson (biology/chemistry), Wiley Jenkins (history/government) and Blanche Prejean (English/journalism).”

After TJC, Malone went to The University of Texas at Austin, where he earned B.A., M.A., and Ph.D. degrees.

He became a well-known singer in the Austin area, distinguished by his encyclopedic storehouse of songs. It was after a road trip to the Bluebonnet Bowl football game in Houston, during which Malone sang countless old hillbilly songs, that his supervising professor recognized his passion for country music and suggested Malone make it the topic for his doctoral dissertation.

Malone received his Ph.D. in January 1965 and took the manuscript of his thesis to the University of Texas Press. It was published as “Country Music U.S.A.”

On the documentary’s website, Malone said, “I think country music, in many respects, is America’s truest music because it comes closer to really reflecting and voicing the aspirations, the fears, the prejudices of average people. The everyday problems of survival are voiced in country music, in my humble opinion, better than they are in any other form of music.”

He continued, “There’s always been a very strong dose of both reality and fantasy in country music. And I think that’s important to people.”

Malone, a Professor Emeritus of history from Tulane University, and his wife, Bobbie, live in Madison, Wisconsin. He hosts a weekly radio show, “Back to the Country,” on WORT-FM community radio in Madison and performs with Bobbie on mandolin and guitar.