On-campus offices are open to students. Online registration is available through Apache Access. Fall classes are offered in-person, online or hybrid. Masks are required at all TJC facilities.

The Tyler Junior College Surgical Technology Program was created in 1999, to fill a need in the region’s ever-growing medical community.

“Surgical techs play a very important part in every surgical procedure,” said Sherry Seaton, department chair and professor of the TJC program and 2018 Endowed Chair for Teaching Excellence recipient. “They must pay attention to every detail of what happens in the operating room.”

Seaton established the TJC program after spending more than 20 years as an operating room nurse and supervisor of sterile processing.

“It’s not something I was looking for,” she said of her interest in surgical technology, “but rather it became an interest over time as I worked in the operating room setting.” 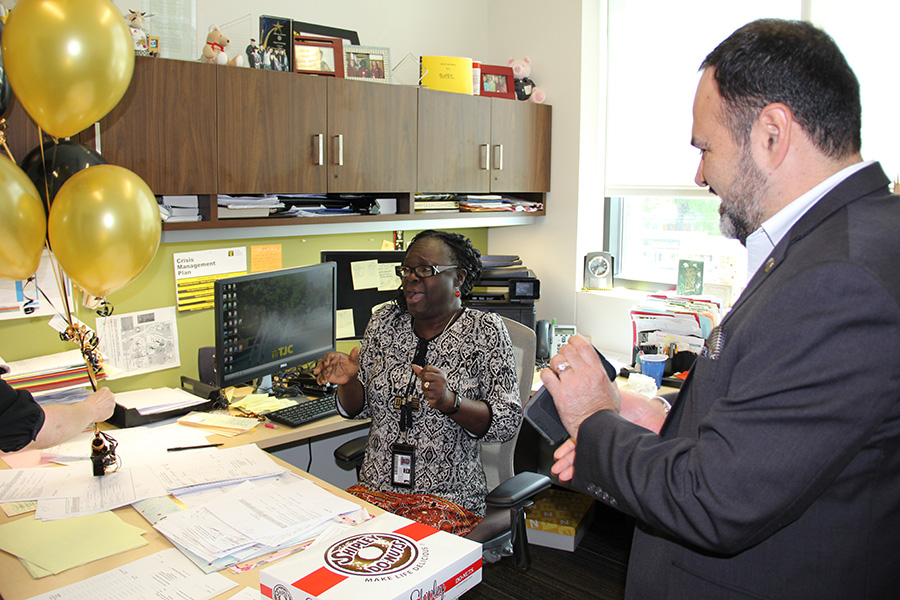 Sherry Seaton is surprised by TJC Chancellor and CEO Dr. Mike Metke and President for Branch Locations and District Provost Dr. Juan E. Mejia on being named the 2018 recipient of the Dorothy Fay and Jack White Endowed Chair for Teaching Excellence.

“I was in the next-to-last class in the Texas Eastern School of Nursing before it became part of TJC,” she said.

Seaton then earned an associate degree from TJC, then a Bachelor of Science in Nursing from The University of Texas at Tyler.

While she was a student, she worked as an anesthesia tech at East Texas Medical Center (now UT Health East Texas); then, after graduation, she became a scrub nurse in the surgery department.

It was her initial exposure to the operating room atmosphere that sparked her interest.

“My job was to take care of the anesthesia personnel and make sure their medications were stocked and instruments were clean and in place for surgery,” she said.

“As I was doing that and noticing what other people were doing in the operating room, I noticed the registered nurses who were scrubbing in on cases and passing instruments and thought I’d like to try that. So, while I was in nursing school, ETMC let me work as a scrub tech and they taught me on the job.”

Her decades of experience also come in handy when she’s screening students for the TJC program.

Each year, Seaton and her staff – which includes professors Brenda Korich and Stormie Perry – offer an open orientation for program applicants, to help them make an informed decision about whether the program is a good fit and vice versa.

She said, “Procedures can go on for eight hours or more; so, if you have bad legs or feet, or if you have back trouble, this is probably not for you.”

In addition to being physically taxing, the job also requires mental toughness.

“The operating room is a very high-pressure area with a lot of personalities and stress,” she said. “I tell potential students that if they have an anger issue, surgical technology is probably not where they need to be. People can say some crazy things in the heat of the moment when they’re trying to save someone’s life.”

In addition to hands-on training using the latest technology in TJC’s Rogers Nursing & Health Sciences Center, students perform clinical rotations to gain exposure to all types of surgical procedures in many of the surgical facilities in Tyler, Longview, Jacksonville and Henderson.

“Our students rotate wherever surgeries occur in the area,” she said, “and they become familiar with everything from C-sections to spinal surgeries to eye surgeries.” 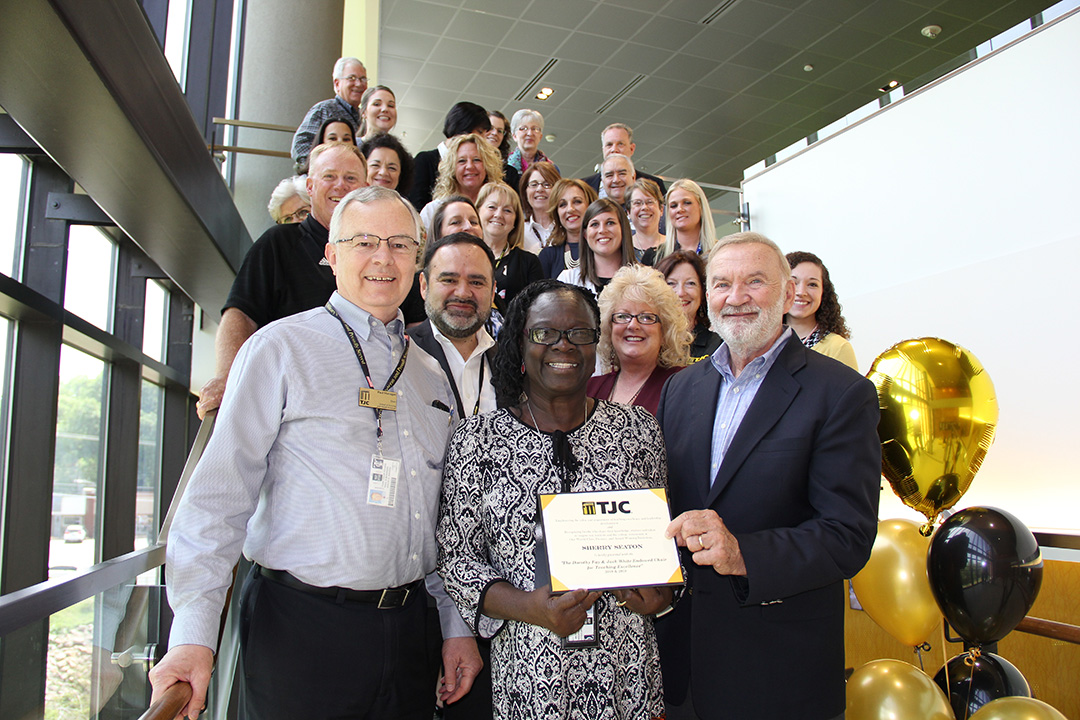 Seaton is surrounded by coworkers after being named the 2018 recipient of the Dorothy Fay and Jack White Endowed Chair for Teaching Excellence.

Seaton said the program can also be a springboard to other aspects of the medical field.

“There are many surgeons around here who worked their way through medical school as surgical techs,” she said. “When you’re a student who wants to be a surgeon, being in the OR is one of the best ways to learn anatomy. Plus, when the surgeons hear of students who want to go to med school, they sort of take them under their wing and pass along their knowledge to them.”

Ultimately, she said, surgical technology can lead to a career that is both personally and financially rewarding.

“The program starts in August and you graduate in May,” she said. “Our graduates start out making from $18 to $22 per hour in this area and even more in the major metropolitan areas such as Dallas or Houston. So, you can be making good money in nine months.”

The registration deadline for the next fall session is Monday, May 20. For more information, go to TJC.edu/SurgicalTechnology.