Jennings and his family attended the event, which was themed “My Heart Will Go On” in honor of his Oscar-winning lyrics for Best Original Song from the motion picture, “Titanic.”

The heart theme touched every aspect of the night, including the red décor, Jennings’ timeless music performed by TJC students, and the meaningful tributes from his family and friends.

More than 40 TJC students participated in the event, including Apache Belles who welcomed guests as they entered the event room and members of TJC music groups who provided the evening’s entertainment, performing some of Jennings’ greatest hits.

TJC vocal group Harmony & Understanding (under the direction of Dr. Eric Posada) sang “Up Where We Belong,” from the motion picture, “An Officer and a Gentleman,” which won Jennings his first Oscar for Best Original Song in 1983. The TJC Guitar Ensemble (under the direction of Frank Kimlicko), performed “Tears in Heaven,” which Jennings wrote with Eric Clapton and won the Grammy for Song of the Year in 1993.

In a nod to Jennings’ days as a trombone player in the TJC Band, the College’s trombone choir (under the direction of Heather Mensch) played a special arrangement (penned by TJC music professor Micah Bell) of “My Heart Will Go On,” which won Jennings and composer James Horner the Oscar in 1998.

Later in the night, Texas native and Nashville recording artist Mignon Grabois sang a moving rendition of “My Heart Will Go On” to Jennings from the stage.

A video montage of Jennings’ life as a songwriter included clips from his four decades in music, his two Oscar wins, and well wishes from collaborators and friends Steve Winwood and Rodney Crowell.

Jennings co-wrote with Winwood on his 1986 Grammy-nominated album, “Back in the High Life,” which included such hits as “The Finer Things” and “Higher Love” as well as the title track. “Higher Love” won Grammys for Record of the Year and Best Pop Vocal Performance. 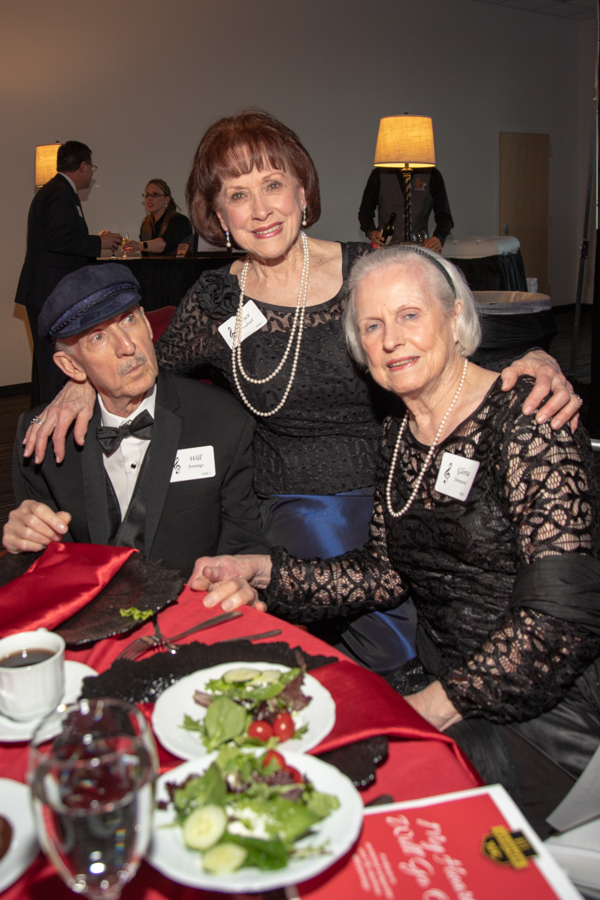 Will Jennings with his sisters Joyce Hudnall (center) and Gloria Townsend.

“Hi, Will. Steve here,” Winwood greeted Jennings in a video from his studio in England. “Sorry I can’t be with you tonight, but I hope you’re having a fantastic time. I remember fondly those times we spent in England writing in the early ’80s; and I also remember those times we spent riding on Mulholland Highway in your Cadillac in 1986 and ’87, listening to Vaughan Williams’ ‘Fantasia on a Theme by Thomas Tallis.’ Those times will stay with me forever. Thank you for all of your wonderful work and all of your marvelous co-writing. Working with you was a real eye-opener. I had never worked with anyone else quite like that. It was a wonderful experience for me, and I wish you all the best and lots of love.”

State Sen. Bryan Hughes, a TJC alumnus, and State Rep. Matt Schaefer both drove in from Austin to attend the event.

Hughes said, “I’m honored tonight to see someone who was gifted with talent and then worked hard to develop it and to share with others and be recognized in the process. How proud we are that you’re from Texas and from Tyler and from TJC.”

He quoted a bible verse from the Book of Romans that said part of the role of government was “to praise those who do well.”

Hughes then presented Jennings with Texas Senate Resolution No. 542, which was read on the Senate floor earlier in the week in Jennings’ honor.

“I was proud to sign and file this on your behalf and on behalf of this community and this state,” Hughes said to Jennings, who was seated with his family at the head table. “We’re proud of you, we’re thankful for you, and I want to present this to you tonight.”

TJC Chancellor and CEO Dr. Metke said, “Bryan will tell you and Will will tell you that nothing so close can take you so far in life as TJC. Even today, people can dream and come here. You don’t have to come from wealth or influence or power. Education is that great equalizer, and you can go as high as your talent and energy will take you.”

Metke continued, “Will is going to inspire generations to come. He’s shown them that even the sky is not the limit.”

Schaefer presented Jennings with a Texas flag flown over the Capitol.

“We were able to have a flag flown over the State Capitol in your honor,” he said. “We’re proud of our flag here in Texas and we are proud of you, and it is my distinct honor to present this to you tonight.”

Townsend said, “I want to say thank you to everyone who had a part in this event because a lot of work went into this, but you had a pretty good subject to work with.”

He recalled Saturday nights from his youth when members of the Jennings, Hudnall and Townsend families would gather at their grandparents’ house on Highway 64. He said they would listen to music their grandfather and Jennings would play from the picnic table after the family had finished eating dinner.

The event culminated with the announcement that the lobby of the new Rogers Palmer Performing Arts Center will bear the names of Jennings and his wife, Carole, whom he met when they were students at TJC. The Will and Carole Jennings Lobby will also house a rotating exhibit of Jennings’ memorabilia and awards from his songwriting career, including two Oscars, two Golden Globes, three Grammys, and many others.

Mrs. Hudnall said, “I want to thank all of you for making an effort to come tonight and support this beautiful evening and for the announcement of a naming spot for Will and Carole that will go on in perpetuity. We especially wanted Will to not be forgotten, so we will have a rotating exhibition of his awards in all the years to come.”

Mitch Andrews, TJC vice president for advancement, said, “We are truly grateful to Will and Carole for their incredible generosity and appreciate the support of the Hudnall and Townsend families. This new lobby will be a lasting tribute to Will and Carole and will inspire future generations of TJC students to greatness.”