Ashleigh Lewis, TJC Learning Framework professor, is helping students open their eyes to new opportunities as they make the transition from high school to college.

As a professor of Learning Framework, Lewis is setting the foundation to help students be successful in their higher education courses and, ultimately in life.

Lewis is a TJC alumna who earned her associate degree in business while busy as an Apache Belle and active in campus life. She went on to receive her bachelor’s degree in public relations from The University of Texas at Tyler and her master’s degree from Angelo State University. She knows the transition from high school to college is not easy for every student, and she doesn’t hesitate to tell her students that she had difficulty making the transition herself. High school had been relatively easy, but she found college was a different “ballgame” that would require developing better study habits and adapting to a new environment away from home. As she explains the theories of learning to her students, she relates her personal experience. “Students have a misconception that all professors were 4.0 students,” Lewis said, “and it’s okay to show the realistic side of things -- that persistence is important. Don’t let one bad semester define you.”

In Learning Framework, students participate in assessments and research and become aware of their personality traits and how those affect their learning style. Lewis helps them develop strategies based on their results, because, as she explains, once students understand their learning style, they can apply these skills in other classes.

Lewis emphasizes how important higher education is to long-term success. “The collegiate journey needs a strong foundation, and students need to know their strengths.” Lewis also encourages students to focus on things that may not be their strengths. “Employers are going to want you to overcome weaknesses, so it’s important to know the skill sets to work on and enhance.”

“My favorite part is seeing the successes my students go on to achieve.”

Originally, from Hallsville, Lewis is from a family of educators. Her mother is a dyslexia specialist and her grandfather was a dean of education at Angelo State University. Her 99-year-old grandmother was also in education at a time when it was unusual for women to complete a bachelor’s degree. Lewis said she decided very early that she was not going to have a career in teaching, but eventually, “it found me.” She attended a job fair at TJC while finishing her bachelor’s degree and several months later, was hired as an admissions recruiter. Lewis said she enjoyed the role, “telling people why they needed to come to TJC.” Soon she was asked to oversee the “First Year Experience” program as part of Student Affairs where she helped establish orientation for parents of incoming students. She was also co-creator of the Apache Chiefs program. When her department was realigned, the academic aspect was introduced to her job, and she decided to go back to school for her master’s degree. By this time, Lewis had gotten married and started a family, so she quickly developed time-management skills to juggle her busy schedule. 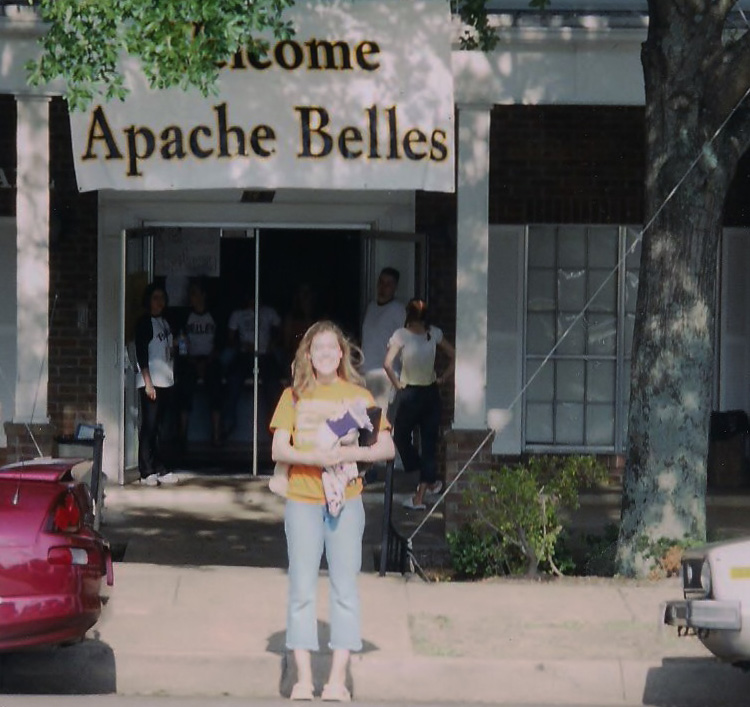 Ashleigh Lewis stands in front of Claridge Hall on her first day as a TJC student and Apache Belle.

Now in her tenth year at TJC and sixth year as a professor, Lewis loves the experience, and students are obviously benefitting from her love of teaching. “Students need someone to see something special in them,” Lewis said. “My favorite part is seeing the successes my students go on to achieve.” At the suggestion of her mentor and co-worker, Cindy Gaddis, Lewis keeps what Gaddis calls a “Smile File,” a folder with a collection of notes, letters and messages. One of the messages in her file is from a former student whom Lewis encouraged to apply to The University of Texas at Austin, knowing that was his long-term goal. “I really want to thank you for not just being a great teacher, but for inspiring me to reach my goals,” the student wrote. “You’re enthusiastic, charismatic, and …your passion for teaching is so great! I will always remember you having faith in me and helping me to reach my first-choice school….you made a true difference in my life.”

Erica Powell, department chair, Learning Framework, said, “Ashleigh Lewis’s dedication to TJC students is evident in her classroom. Whether through game- or project-based learning, flipped classroom, teamwork, multimedia, or interactive technology, she does whatever it takes to engage her students. At the same time, she sets consistently high expectations for academic rigor, class involvement, and personal behavior for her students.” Lewis was recently recognized as a recipient of the Dorothy Fay & Jack White Endowed Chair for Teaching Excellence. The TJC Endowed Chair for Teaching Excellence program enables professors to nominate and reward their peers who demonstrate outstanding work as educators. 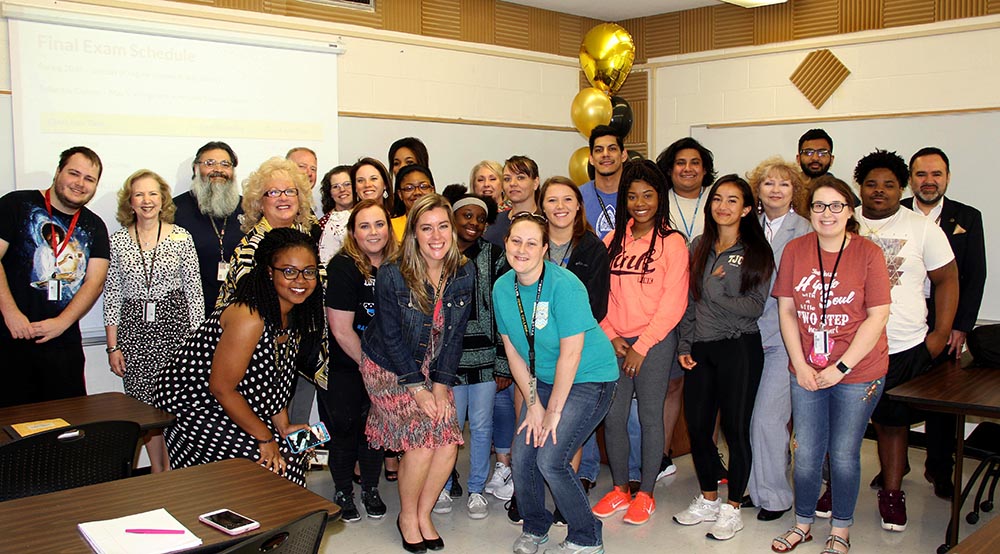 Ashleigh Lewis is surrounded by students and co-workers after being named the 2018 recipient of the Dorothy Fay & Jack White Endowed Chair for Teaching Excellence.

“Our institution values and celebrates teaching excellence, because it is key to student and community success. We are all very proud of Professor Lewis and her approach to making a positive difference at our beloved institution,” shared Juan E. Mejia, President for Branch Locations & District Provost at the College.

Lewis and her husband Scott have three children together including Ava, Bryson and Candice. When she’s not working or taking on a community service project, Lewis loves to travel or to spend time boating or camping at the lake with her family. She often talks to her classes about her family as well as the time she spent as a TJC student. “I am thankful to be here now, in this role, to help students.”