Hindman, who got her first name from a silent film movie star, coaches the TJC Forensics team – leading them to compete against two-year and four-year colleges across the nation – and they win consistently. This past week, they won 2nd Place Community College Sweepstakes in Peoria, IL, at the American Forensics Association’s national tournament hosted by Bradley University.  This week they’ll be traveling to Washington, D.C. to compete in the Phi Rho Pi Community College Nationals.

Hindman got her start under Speech Department Chair Dr. Jean Browne as an adjunct, where she quickly moved up the ranks as a full-time professor and speech and debate coach. She completed her bachelor’s degree in speech from Texas Tech University, and her master’s in speech and communication from the University of Houston. She lives in Tyler with her husband, and together they have two daughters and four grandchildren.

What would you say inspired you to teach?

M’Liss Hindman: Good teachers. I was blessed. I went to a very small high school, but I had really good teachers and they inspired me and I fell in love with the idea of teaching others. I must admit, I really thought when I first went to college I was going to be a journalist. As soon as I took my first college speech class I went, ‘No, I think I want to be a speech teacher.’ It changed my mind.

What was it that drew you to speech?

MH: I participated in speech activities since the second grade—I competed in a UIL storytelling contest. I had been involved in speech events my entire career in school. I just loved it. My mother was a substitute teacher, and I was around a lot of teachers.

What brought you to TJC?

We made a bet that whoever got a job first, that’s where we would move. We really didn’t want to stay in Houston because both of us were from smaller towns and we were both like, ‘Yeah, let’s get back to something a little smaller than Houston.’

I came to Tyler Junior College pretty blindly. I’d never seen the campus before I applied for the job. I did drive up here and see it, and I met Dr. Jean Browne who was the chair of the department at that time. I fell in love with the campus immediately. That first year I was an adjunct teacher. They had me teaching four classes, so I wasn’t much of an adjunct—it was almost a full load! But I enjoyed it tremendously and they got me involved coaching the speech team immediately that first year.

Do you have memorable lessons that you like to teach every year that stand out to you?

MH: I teach mostly online now, so I don’t lecture as much as I used to. When I was lecturing though, I actually had two lectures that I loved to give the most. One of them was about the communication process, how that works, because you could see students’ minds actually opening up like “wow, I never thought of communication that way,” breaking it down to all the different components of what is happening when one person is communicating with another, and what all goes on in our brains.

I also love talking about visual aids because I had such great stories of what not to do in a visual aids speech that made the students laugh and they enjoyed it so much. It was probably one of my favorites. But now that we don’t use as many hands-on visual aids, now it’s all PowerPoint. I no longer get to tell my story about the time a student brought a rattle snake to class. [Author’s note: not in her class.]

You’ve taken students all over the country to compete. What do you see as the shining moment? 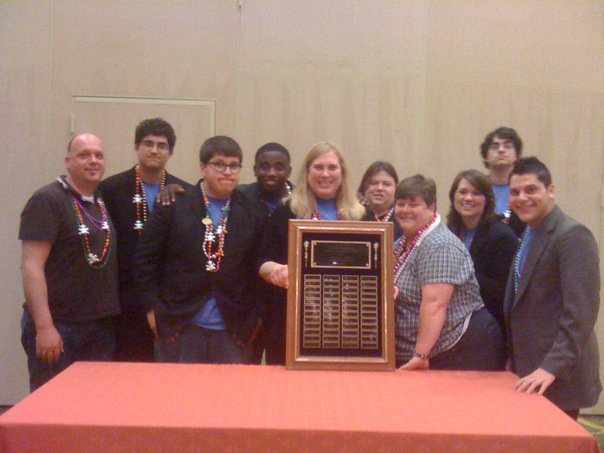 M'Liss Hindman and her students with the Mariner Sweepstakes trophy.

Not only did we win a sweepstakes trophy there but we finally won the Mariner Sweepstakes. It’s cumulative of all the points that your students have ever won, and as soon as you win that championship, your points go back to zero. You have to start accruing points again.

Some of the larger colleges that always take 14 students per year have won that Mariner cumulative championship maybe four or five times over the years. We had hovered in the top five schools for years...maybe fifteen years. We always had good caliber students but then these larger schools would jump us to win it year after year after year. We finally won that championship and it was an amazing accomplishment because it meant that not just that team, which was an incredibly special team of very talented kids, but it was all the former students too who had contributed to it. There were a lot of tears of happiness shed.

Do you have kind of a philosophy you teach by?

MH: My philosophy in teaching is to bring out the best in my students. Communication is so important to all of us and it’s something we take for granted. And we assume that we know how to do it, and we know how to do it well. When indeed, some people don’t. Some people don’t know how to conduct an interview or how to meet somebody for the first time. They don’t know how to even shake hands properly; they don’t know the importance of eye contact when you’re making a presentation. There’s just so many details.  Showing students how to do that and bringing out their best attributes is, I think, a life changing event for them.

I’m blessed that I’ve had several former students, not just from my team but from my class, come and tell me how my class changed their life. That’s the basis of my philosophy: to open their eyes to show them how important communication is, and to appreciate it.

Do you have any stand-out former students?

MH: I have so many stand-out former students! So many come to mind, it’s hard to pick out just one, but Chris Tomlin would certainly be one of the ones. He was in Jacque Shackelford’s speech class, and she recruited him to be on our team. She brought him in to meet me, and I was immediately charmed by this young man, and when he told me he played the guitar—I was trying to get to know him a little to find out which speech topics would be good for him, I said I think you ought to do a speech about country music, which was just starting to be a big hit then.  And then he came back in and he sang a song—an original country western song that he had made up, —and I was like, ‘Chris, you’re really good!.’ 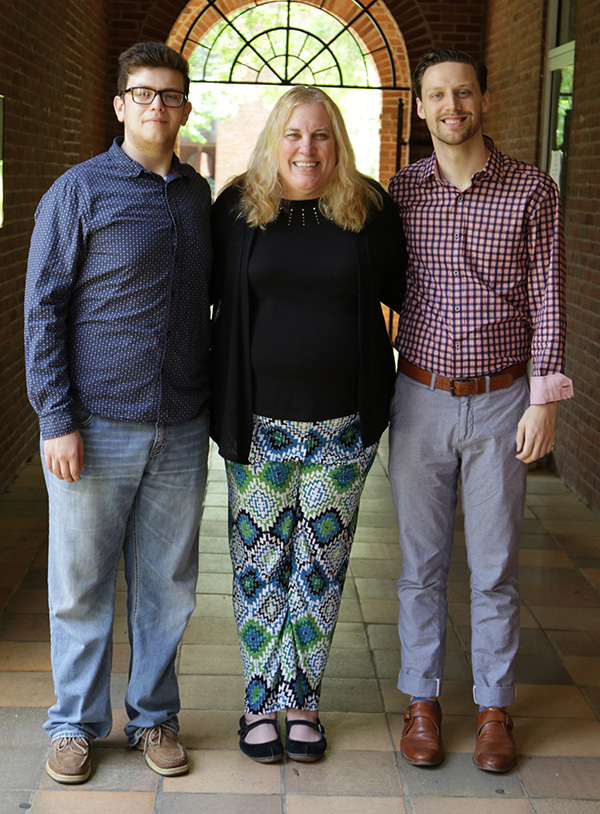 M'Liss Hindman with two of her former students: Jacob Savage (left) and JP Fugler (right). Fugler, who is a speech teacher at Van High School was awarded the John F. Kennedy Center for the Performing Arts/Stephen Sondheim Inspirational Teacher Award in 2015.

So he actually wrote two short original songs to use in that after-dinner speech and they were both amazing. Not only did he make finals at his second tournament, but he was still up on the award’s stage when they announced the third place winner, so it meant that he was either going to be first or second. Chris won first, his first that day. One of many. And of course, we know now that he’s a star, one of the biggest in Christian music. [Author’s note: Chris Tomlin has won 19 of the 32 Dove Awards that he has been nominated for and has won a Grammy and been nominated for a Grammy three other times.]

What are you looking forward to going on in the future? What are your plans?

MH: I’d say ‘Do it!’ You will never regret it because it gives you all the tools you need to be successful whether you want to be a doctor, or a lawyer, a minister, a CEO of some major company, a teacher yourself. It affects every career there is and we have very successful students in all of those areas and more, and they all tell us that being on the speech team was the wisest decision they ever made because it gave them the poise and self-confidence to be able to do so much.

Learn more about the speech and debate team.