As part of its 90th anniversary year, Tyler Junior College is honoring some of its most famous living alumni through a new program, the Legends of TJC.

“We have such a rich history of tradition,” TJC President Dr. Mike Metke said. “What better way to celebrate our 90th anniversary than by creating a new tradition recognizing our successful alumni?

“TJC provides a great foundation for our graduates to be successful in whatever field they choose,” Metke said. “In recognition of their achievements, we will proclaim a special day for each of them and host special events in their honor.

From TJC to an exemplary military career
Admiral Bobby R. Inman was among the first group of students who rode a school bus from Mineola to attend classes at TJC.

As a student at TJC, he was inducted into the Alpha Omicron Chapter of Phi Theta Kappa honor society on April 19, 1947, at age 16. TJC’s Alpha Omicron chapter was chartered in November 1930 and is the 10th oldest continuously active chapter in Phi Theta Kappa. Inman was named a Phi Theta Kappa International Distinguished Alumnus at the 1984 National Convention.

After graduating from TJC in 1948, he transferred to UT Austin and graduated in 1950, then joined the U.S. Navy. He attended the National War College in 1972.

Inman’s final assignment as a naval officer came from President Ronald Reagan, who named him deputy director of Central Intelligence. Along with that job, he received his fourth star. He retired from the Navy and began his civilian career in July 1982.

In 1984, he was asked by Secretary of State George Shultz to chair a committee on security threats to U.S. embassies around the world. Inman agreed, as the assignment would be non-partisan and the committee’s recommendations were used to create embassies built to their specifications. 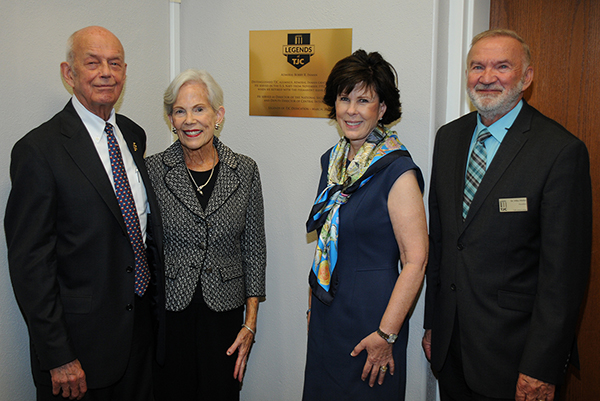 Inman’s TJC visit
Today, the main lecture classroom in Jenkins Hall – TJC’s oldest and most iconic building – was dedicated and named Inman’s honor, with special memorabilia and historical mementos placed in the room reflecting his accomplishments.

In his remarks this morning, Inman credited TJC and his professors for his educational foundation and for inspiring him to succeed.

“I went on to UT Austin and got my baccalaureate degree in 1950,” Inman said, “but because of the experience I had at TJC, I was able to compete completely with my classmates who had been at UT the entire four years.”

Throughout the day, Inman and his wife, Nancy, attended several events held on campus, including a dedication ceremony in Jenkins Hall, visiting with TJC honors students, and a distinguished lecture by Inman in Wise Auditorium.

“We wanted our current students as involved in these events as possible,” Metke said. “I hope that they find Admiral Inman an inspiring example of the successful futures that start right here at TJC.”

Legends of TJC honorees to be recognized in the coming months include NBA standout Jimmy Butler, Oscar-winning lyricist Will Jennings, and Grammy-winning singer/songwriter Chris Tomlin.