The Apache Belles
Since 1947

The TJC Apache Belles have been entertaining audiences from the football field to the performance stage since 1947 with their precision dance and head-turning production numbers. For over sixty years, the trademark precision dance, cutting-edge routines and, of course, the famous Apache Belle “high kick” have thrilled fans across the globe.

The Apache Belles bring eye-popping color, pyrotechnics and precision dance to venues while charming audiences with their Texas-sized smiles as they kick, split and dance their way into your heart. They have been hailed as “the prettiest drill team in the world” by Family Weekly magazine and have performed across the state, cost-to-coast and around the world.

This precision team has traveled all around the world to Mexico, France, Ireland, China, Austria and Germany to perform at parades, celebrations and balls for dignitaries, special guests and, of course, for the military men and women of the great United States of America.

The Apache Belles have been the subject of numerous media publications appearing in Southern Living, Woman’s Day, Texas Outlook, Texas Parade, Dance and Drill Magazine, Venture Magazine, and many more. They have met and entertained such celebrities and dignitaries as Former President Ronald Reagan, Former President George and Barbara Bush, Former President Bill and Hillary Clinton and Governors Ann Richards and George W. Bush. The Belles are the perfect hostesses for any event.

Pow Wow Dance Camp Dates and information to be released in April. Check back for updates on our Facebook page.

In honor of the 75th Anniversary of the TJC Apache Belles and Apache Band let’s celebrate the “most wonderful time of the year” TOGETHER! Join the TJC Apache Belles and TJC Band Wind Ensemble for an evening of live music, dancing, sing-a-longs and Christmas fun for the entire family. This is sure to become a Tyler Tradition,  so you won’t to miss this Inaugural year of the Apache Band and Apache Belles Christmas Extravaganza! December 9th and 10th at 7:30pm $10 per ticket for those 6 years and older. (5 years and younger get in free but must sit in an adult lap if the show is sold out). Get your tickets now- two performances only so they WILL go fast. 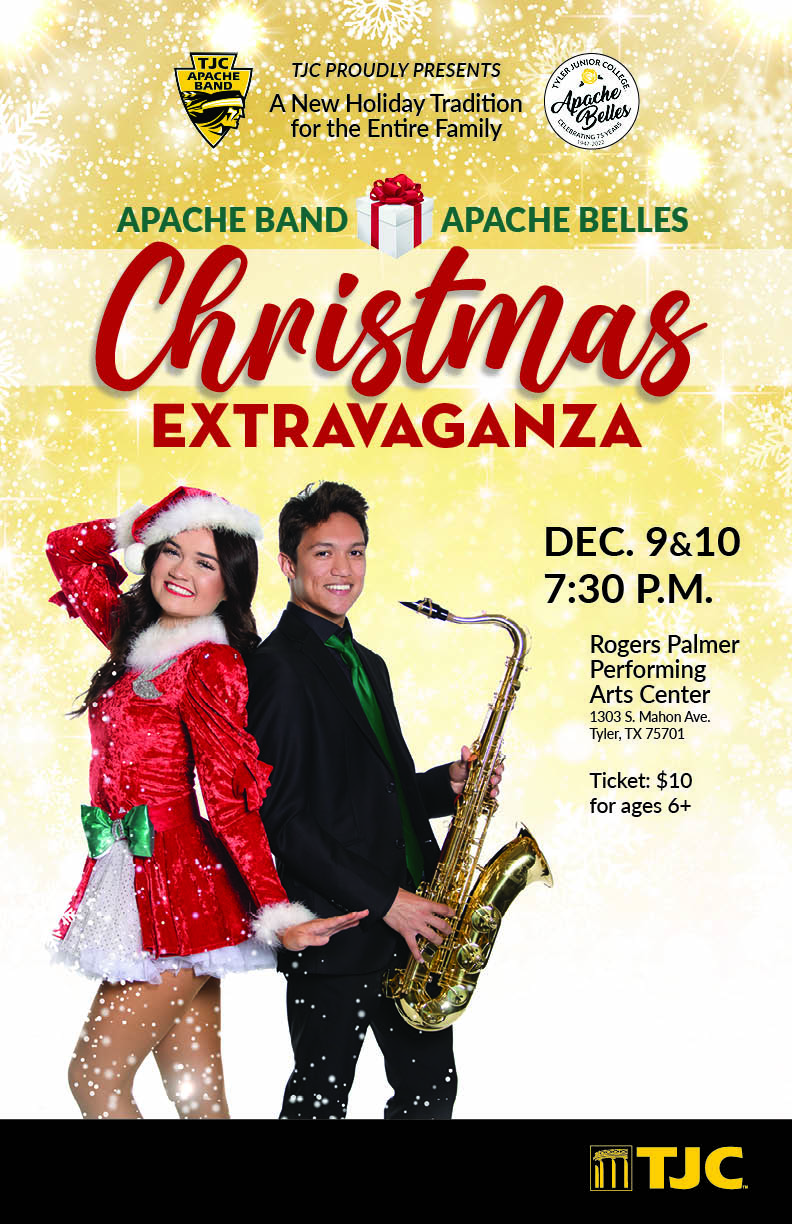 The Apache Belles have a shared and historic legacy with the Apache Band. Both founded in 1947 to perform during football games, the Belles and Band have traveled the world together, entertaining audiences at halftime shows and on military bases.

Reconnect with the time that you spent as a Belle or Guard, and stay informed with the current Apache Belle line.