All TJC locations will be open on Friday, 2/3/2023. Classes and business operations return to normal.

Early on, the school established student activities, clubs and traditions that have become hallmarks of TJC spirit and pride. In its first year, the school formed the drama club, Las Mascaras, the oldest continuous student organization, and approved campus activities, including football, men's and women's basketball and an outdoor recreation club. 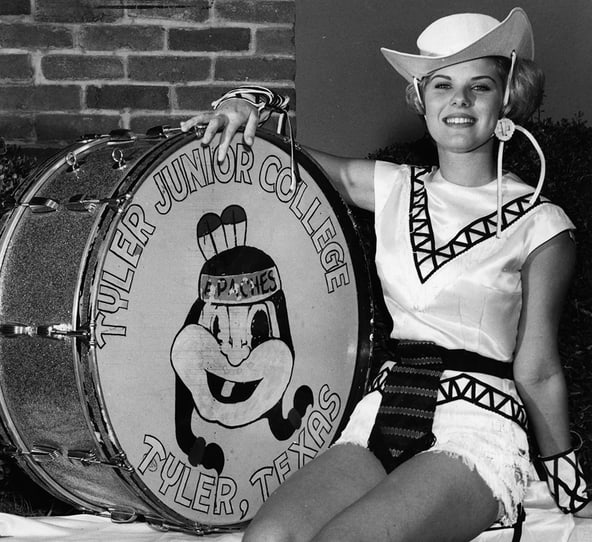 The Apache Belles were founded in 1947.

In 1927, the College published its first campus newsletter, the Apache Pow Wow, and in 1930 chartered the Alpha Omicron Chapter of Phi Theta Kappa, one of the oldest national honor society chapters in the nation.

In the 1930s, as the country struggled through the Great Depression, TJC enrolled only 200 students. However, the prosperity of the 1940s signaled major changes. In 1945, Tyler voters overwhelmingly approved a measure to create a junior college district and issued $500,000 in bonds for the College to have a campus of its own. The expansion included additional full-time faculty members and would lead to new facilities including the iconic building on Fifth Street, eventually known as Jenkins Hall.

Since its rebirth in the 1940s, TJC has continued to expand. The Tyler Junior College District is now composed of six independent school districts, including Chapel Hill, Grand Saline, Lindale, Tyler, Van and Winona.

Today, after 90 years, Tyler Junior College offers more courses in any single major division than were offered in the entire curriculum in 1926. Just as the courses have diversified, so has the TJC student body. The College now has an enrollment of approximately 11,000 students each fall semester and provides continuing education to some 8,000 individuals each year.

-Excerpt from "90 Years: Reflections of Achievement"

Join us as we celebrate our alumni during homecoming week! Beat the drum, walk the rim and tailgate before the football game.

A vibrant campus life is a foundational component of TJC. Find out more here!